Note: This document is fairly out of date. While a lot of the information within it is valid, the strategies to various tricks in here has since been improved or trumped by another strategy.

I might not be updating this document in this future, so if anyone wants to fork this git to continue it, feel free. In the meantime check out BLAINES YouTube as he has covered glitches found since I stopped documenting them.

Do note that I do not agree with BLAINES strategy of obtaining information on some of those glitches nor the uncredited nature and absurd waffling he does to extend the length of the videos.

This lets you move through some (but not all) collision and enter areas you aren't supposed to. You can skip battles, trainers, cutscenes, and so on if elevation is high enough. You can go Out-of-Bounds by manuevering in certain ways. Even the indoor void with some methods, like the Great Marsh door.

This method doesn't require a single NPC to pull off. It's infinitely repeatable, and stackable!

This method involves angling and inching in your movement towards the NPC, and then mashing A as you do so. The game handles the Surf prompt somewhat before the battle trigger, which upon ending the battle continues the prompt letting you say "Yes" to Surf, which at that point are facing the NPC and not the water making you Surf on Land.

NPCs near a water tile

Timing for the Tuber Boy NPC on Route 213

The timing for the distance between NPC and the player needs to be precise for the timing to match with the surf action or one of them will be either too late or too early.

To then go to Snowpoint City and Lake Acuity simply go left and talk to the Sailor.

Router: Ballistixx#6389 (based on other route)
Requires: Surf on Land, Menu Storage

This route normally needs you to complete the National PokéDex to enter. No hard-defined route yet, but progress is being made through Celestic town and Menu Storage.

I don't recommend doing this route without Fly or you might not be able to leave.

This glitch lets you keep your menu open even when entering areas in which it would typically not let you open it, e.g., the Void. This is best combined with the Surf on Land Glitch.

There's a few uses of this glitch and one of them is to see where you are. The Town Map doesn't accurately show your real position, but the Save Menu does.

This glitch is mainly used with Surf on Land to allow saving. This is because if you save and reset in specific scenarios you can actually re-load the area you are currently glitched into to get there early.

While initially thought to be mashing X and A at the same time, it's actually just mashing A incredibly fast.

This glitch lets you keep the PokéWatch's Fly menu open. It's a slight variant to the Menu Storage glitch and will not work for every instance Menu Storage is needed, as the other menu options might be used, yet only Town Map can be used.

No one knows quite why, but only specific doors/warps work for this trick. Only one door has been found so far and that is the one to the Battle Tower. It seems to be caused by the game placing you within the door warp hitbox when leaving the Battle Tower, rather than behind it.

Using Menu Storage it's possible to store a script at any point in the script, and at a later point either continue it, or skip it entirely. When the script is stored, the game essentially freezes in all ways other than movement and some actions.

The game will not continue until the script continues and finishes. You can let it continue by,

This glitch has many uses e.g.,

When you clone a Pokémon, the held items they hold will also be duplicated, as well as any other perks like their Ribbons, markings, stats, and more.

You need at least 1 target Pokémon (up to 6), and the same amount of bin Pokémon. A bin Pokémon is a Pokémon you do not care for as it will be replaced with a clone. i.e., duplicating 2 Pokémon will need 2 bin Pokémon.

Move Reminder on Any Pokémon

Using the Move Reminder you can force a Pokémon's relearnable move onto any other Pokémon. This works for moves the Pokémon otherwise cannot learn.

If you can obtain Menu Storage or Surf on Land, you can generally skip anything you want. Including the entirety of Gyms, trainer battles, rival battles, story cutscenes, and more.

This list of skips are generally only covering unique glitches, or glitches that may be pivotal entry-point glitches. This is not a definitive list nor will it ever be. There may even be multiple ways to get the same end result.

You can breach past the ledge at the start of the game that prevents you from going to Sandgem Town early. This will skip:

This will not skip getting your PokéDex, and the game will think your "Starter" is an Egg. It would otherwise seemingly work correctly, and you can even catch Pokémon and then get your starter.

However, it is quite tricky to pull off and generally has no benefits. There isn't real reason to skip the starter, mainly due to the Pokémon list being needed for a type of Menu Storage and the running shoes being very useful.

Unfortunately, you do not keep the PokéDoll once this skip is performed. However, there is a glitch that lets you duplicate held items, see Duplicate Items.

Save and Reset Method

If you can exit surf, enter the trainers line of sight, then immediately without turning press A on a surfable tile of water to entirely skip a battle start trigger.

This is seemingly because theres invisible frames that allow you to quickly re-surf after you just get off, making you completely skip past some trainers.

The only trainer known so far that the requirements match is the trainer on Victory Road, B1F. The one standing between the three bodies of water.

You can skip the entire gym puzzle by essentially running right to Candice in a specific way.

Using nothing more than a repel and timing, you can stop your movement momentum in front of any stair tile then run straight to candice.

There's nothing to it other than timing when the repel will wear off. Take a look at the linked video for a convenient setup and example.

With this glitch you can "store" a battle away and start it whenever and wherever you want. There might not be much uses for this, but time will tell.

It's very simple. Surf on Land and walk up to a hidden trainer (e.g., Ninja trainers near Snowpoint).
The trainer will pop out but the battle will not begin until you exit bibarrel.

With this glitch you can use Egg hatching to bypass NPCs that block you from passing through an area. For example the NPC that blocks you from entering Sunnyshore.

The general idea is to hatch an egg on the tile which triggers the NPC blocking sequence. With enough movement momentum the egg hatching sequence can push you past the cutscene trigger and let you through.

But, When will my egg hatch? 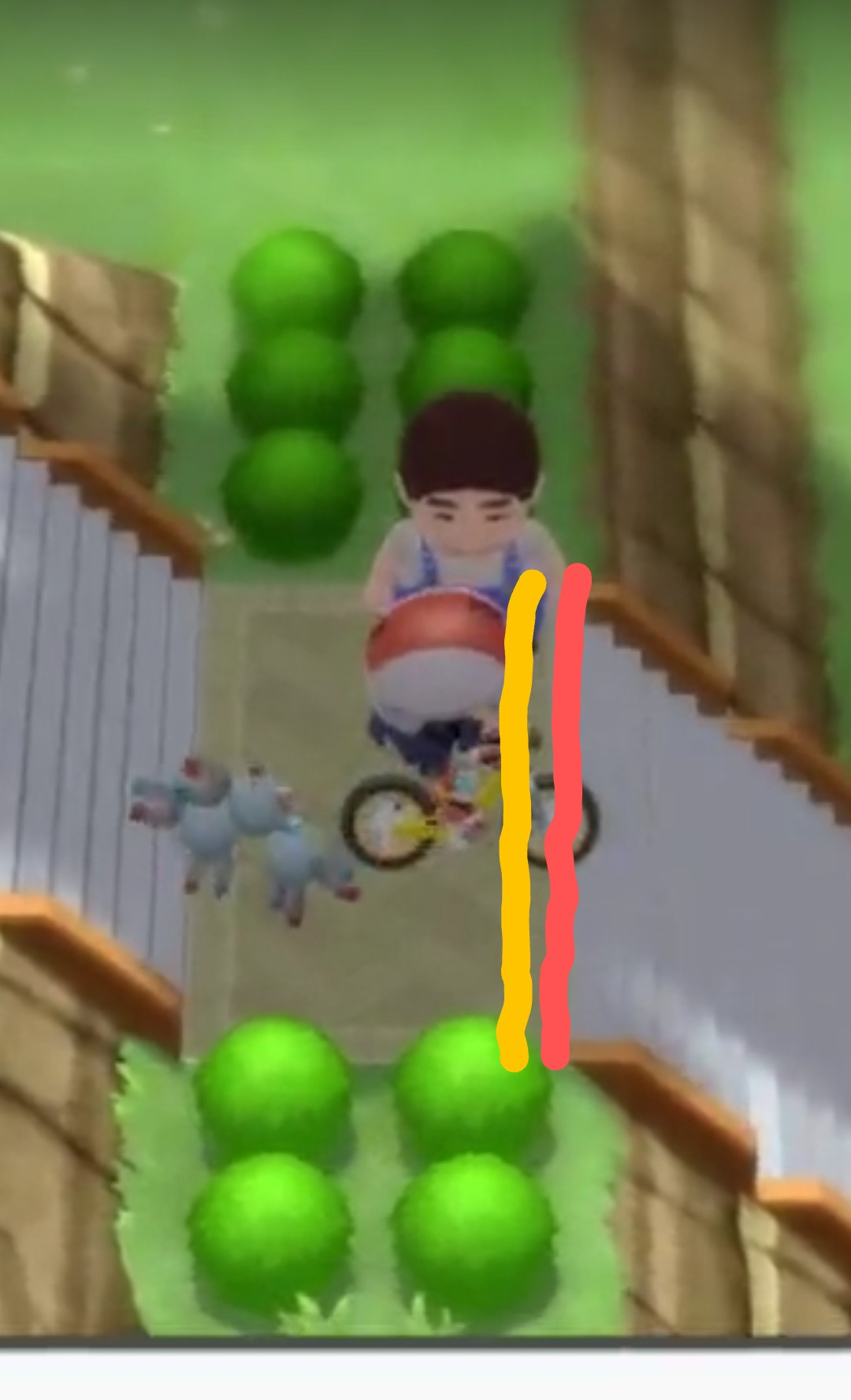 Bike's front wheel (front half or so):

You can breach through walls in some confined areas by simply spinning with the fast gear bike.

This seems to generally work anywhere that has only one tile with walls all around it except for one side.

Camera movement at the end of a cutscene creates some 'Invisible Frames'. These small time windows allow you to move around and avoid all kinds of nearby triggers, cutscenes, and so on. Even battles.

It seems to trigger this, you simply need to start moving as soon as you can after the cutscene ends. It's not entirely clear.

You can sometimes walk straight through a snowball in Snowpoint Gym after entering the gym if you move quickly enough. It's thought that this glitch may be the reason why.

Is your save screwed?

Holding Up + B + X at the Menu Screen will seemingly load a backup save. The details on this is fuzzy.

This is a list of glitches that are either useless, can happen by accident, or soft-lock the game.

Very rarely, when exiting a building you may immediately crash, even when you reset your game. The exact details of this, and if you should save, restart, or such is unclear. However, it is told that you should "Disable Auto Save to escape".