Consider the need to use a dictionary. You will have to insert , look-up , remove words to and from it. What data structure would you use ? Would you use a hash table ? Would that be efficient in terms of memory? Perhaps not.

A Trie is a tree like data structure used for storing words in a way which facilitates fast look-ups. They prove very useful for handling dictionaries. What is special about them is that you can determine the longest common prefix between multiple words and even use it for autocompletion of words.

The concept behind tries is easy to understand and to implement. Suppose you have 4 words: roll, round, to, tour. Here is how their corresponding Trie looks: 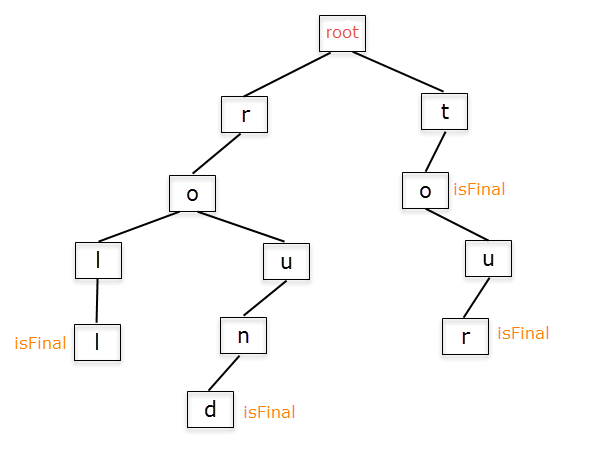 Take the folder hierarchy for example:

You can follow a path from the root to any directory. That path will uniquely identify that subdirectory (and all the files in it).

root - starting point of the Tree

edge - the connection between one node and another

parent - converse notion of a child

leaf - node with no children

path - A sequence of nodes and edges connecting a node with a descendant.

2. Example of a Trie

To begin with, let's represent a Trie containing lowercase words. Each TrieNode will have a lowercase character bound to it (except the root Node) and a limited number of children, given by the length of the alphabet (the english alphabet has 26 letters) .

The following is a representation of a Trie containing the words : round, roll, to, tour.

isFinal indicates whether a TrieNode corresponds to the last character of a word. Notice that the words "roll" and "round" have the "ro" prefix in common, while the words "to" and "tour" have in common "to".

The Trie class will have only one stored member. Guess which one :)

Inserting means creating new TrieNodes and that functionality should be provided by the TrieNode class. Therefore, we need to add more functions to it .

They are used for finding or creating the TrieNode corresponding to character and then return it.

Now we can proceed to adding our first few words to the Trie.

Given a String, we iterate it character by character. Starting from the root, we use getOrCreateChildFor(character) and switch to the newly created node. Below is the step-by-step representation of adding the words "roll" and "round".

Notice that in the process of inserting "roll" we create nodes for all characters in the word, while for adding "round" we don't create additional nodes for the already existing prefix "ro". We only insert the nodes for "und".

Inserting the words "to" and "tour" will follow the same procedure. Inserting "to" means creating a child with letter "t" from the root node and, from it, another for the letter "o". Now, when inserting "tour", "to" is part of the Trie, so we only need to insert "ur".

Here's a straightforward implementation using the helper functions from the TrieNode class.

The function should return true if a given word is present in the Trie, false otherwise.

The process is very similar to the Insert function. Instead of creating a node at each step, we only check for its existence. When we get to the last character of the word, the corresponding TrieNode must have isFinal set to true, in order for the query to return true.

This line of code is something called Optional Chaining and it lets us write cleaner code.

When it encounters the first nil in the expression it automatically returns nil.

Remove works the same way query does, but we change isFinal at the last TrieNode.

What do you notice with this implementation ? If we delete the word "round", this is how the Trie will look like: 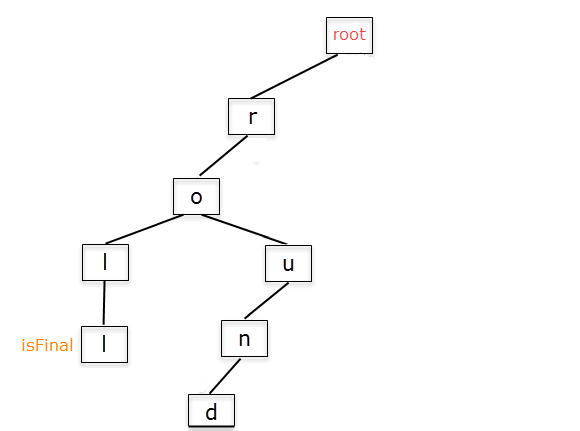 We are still left with the actual sequence "round" in the Trie, but the next queries will return false because isFinal would be set to false, when called for the word "round". The following code :

If we were to remove the actual sequence, we would have to delete the TrieNode references from the children member, the key - value pairs, for each node in the Trie.

It would be useful to have the path in TrieNodes for a given word, don't you think ?

The idea is to iterate backwards the sequence returned by the previous function. At each step we check for the node to have isFinalset to true or to have at least one child. If none of these requirements is met, the node reference is deleted from the Trie.

Because of deleting the word "round", we have our first TrieNode pointing to the "d" letter. None of the previous mentioned requirements are met, so the reference to this node is going to be deleted from the TrieNode.children corresponding to the letter "n".

Here's a step by step explanation for the new remove function:

Also for the the word "roll":

with the corresponding implementation:

Having the isFinal member helps, but it doesn't offer enough functionalities. If we were to count the number of unique words in our dictionary, how would you do it ? A short answer : a new TrieNode member calledprefixCount. 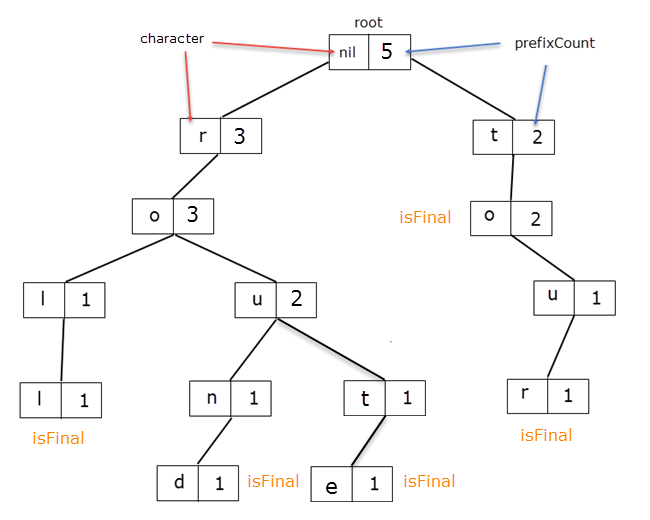 According to the previous graphical representation, the insertand remove functions suffer changes.

When inserting a word, a simple rule would be to increment prefixCount for each node of the way, including the root.

And the implementation doesn't change much:

The query function doesn't need modifications, but that's not the case for remove.

Having the sequence of nodes for a word given by getNodeSequence, we need to decrement the prefixCount value for each node. After we do that, we also do the check prefixCount == 0. If it's true, it means that there are no words in our dictionary that reach that node. It's safe to remove the entire sequence of nodes from now on. Step by step:

Mentioned in the previous chapter, the implementation consists in returning the prefixCount member of the root node. How simple is that ? :)

Given a prefix, the function returns how many words in our dictionary have it in common. Take the Trie from chapter 7. If we were to call the function for the prefixes "t", "to", the function would return 2 because both "to" and "tour" share those prefixes. Same logic goes for "r", "ro".

Every word is a prefix of it's own; therefore, calling the function with one of the 4 words in our dictionary( roll, round, to, tour) will return 1. 1 is also returned when called for the prefix "roun" for example.

Here's how we do it:

We iterate the word character by character. If the corresponding TrieNode doesn't exist, we return 0; otherwise we return the value of prefixCount from the last TrieNode.

Notice how similiar the function is to query. They both use the last TrieNode of the sequence. In order to avoid repeating code, we might just create a function to return that node, if it exists.

And the query and wordsSamePrefix functions will look cleaner:

The function will remove all words having some prefix. The only diference from this and the remove function is that we decrease the prefixCountmember of all TrieNodes with the prefixCount of the last character TrieNode.

To make the example clear, consider adding to our previous Trie the word tea aswell. 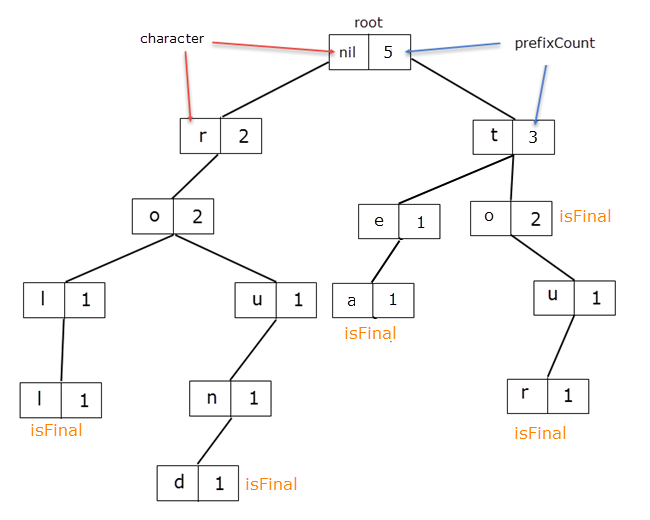 Now, let's say I want to remove all the words with the prefix "to". That means a total of 2 words: to, tour.

Bellow is a recursive implementation which should be called with one parameter:atIndex(the k value previously mentioned).

Based on the index of the sequence to be followed from that node, we call the function recursively with the proper child and indexas follows:

We iterate through its children. If a child's prefixCount is less or equal than our index value, we add it to skipped, which indicates how many words we are skipping with that child.

When we get to a node and skipped + child.prefixCount > index it means that our kth word is within that child's reach and we call the function recursively with that child and index = index - skipped. The index is adjusted so that we refer to the sequences starting form that child.

It may not look so efficient to iterate the entire alphabet at each step(for char in alphabetSequence{ }), but it's either that or sorting the dictionary keys:

Bellow is a representation of kthWord(atIndex: 2):

The only solution is to check that all Characters in the sequence belong to the given alphabet, one by one...

We use validate as a precondition, indicated by guard:

The complete code for the lowercase alphabet can be found here : http://pastebin.com/dmPdzzkj

We used so far the lowercase english alphabet for our Trie. It's time to generalize the Alphabet.

The AlphabetCharacter needs to be Comparable for the kthWord function and Hashable because it will be used as a key in a dictionary.

Bellow is the TrieNode for a generic T which respects the Alphabet protocol:

All Trie functionalities stay the same:

Notice that the new insert function takes a generic U which conforms to the protocol CharacterSequence:

The reasons for making the SequenceCharacter conform to Comparable and Hashable are the same as for the alphabet.

All our non-generic functions took a String as parameter and we would call the functions with a Character array. To be able to use String that way with generics, we need to conform it to our protocol:

The need of the constructor is caused by the following non-generic syntax of the kthWord function: return String(characters).

The complete code can be found at: http://pastebin.com/Tm57evsn

How about having a Trie for Integers. Instead of a String, we will have Int and the alphabet will consist of all digits from 0...9. How hard can that be to implement ?

The constructor takes an array of Int8 and makes an Int out of it, while the toSequence()does the opposite by using a clerver mapping: the Int is converted to an String then each Character is mapped to an Int8.

When you are typing something and a list of words appear, it's our Trie in play!

If given "prefix" is not contained in the Trie, we will return an empty list. Otherwise, using a DFS, we get all nodes accessible from the prefix. We need them as tuples of the following form (node, corresponding character, prefixCount).

PrefixCount will dictate how to compute words.

Bellow is a standard DFS.

As you can see, buildWords function takes as parameters the prefix and the sequence of discovered nodes from DFS. Consider the following Trie:

At a call of suggestWords("ro"), discoveredNodes will contain the following nodes in the order marked with red: 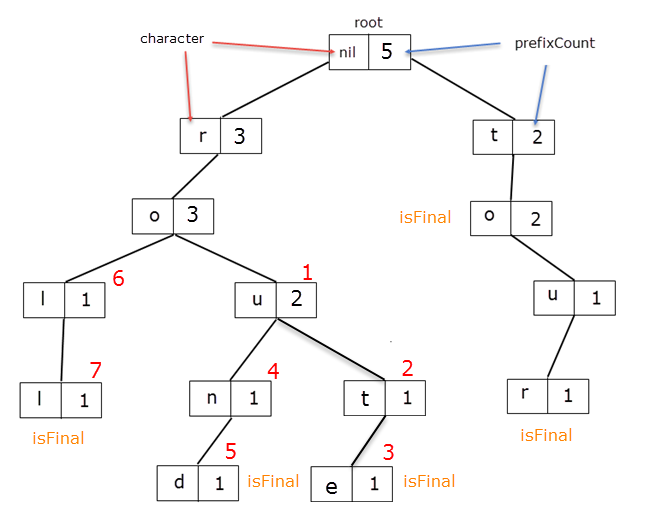 In the buildWords function we iterate discoveredNodes until we find a node for which isFinal is set to true. When such node is found, we iterate once again from the beginning, but stopping at our initial node. Each node found along the way, having counter > 0, is included in the current word and counter is decremented, in order to indicate the limited number of usages.

Here's how the construction of the words "route" and "round" will go like: 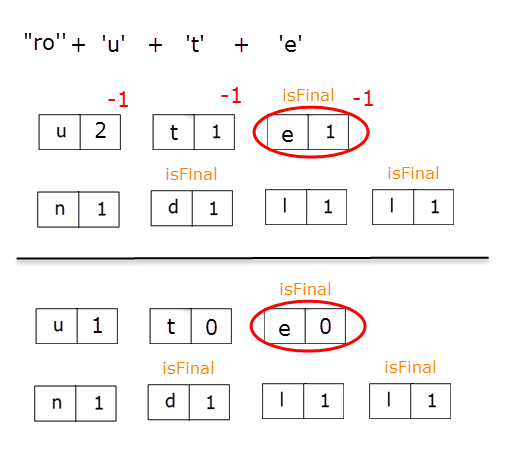 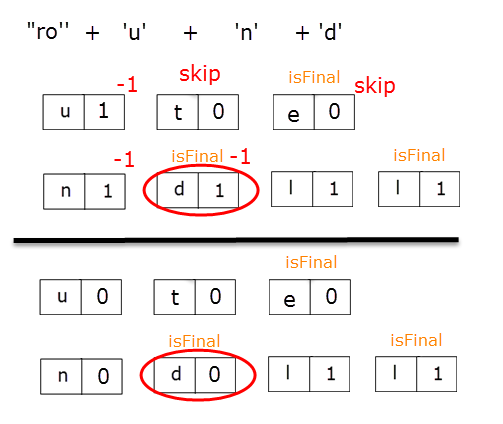 Bellow you have the code:

I left 2 prints there to make clear at runtime how the algorithm works.

Remark: The algorithm does not return the prefix itself if it's a valid word in our dictionary

Now, that we reached the ending, I hope the article made you see the importance and usefulness of the Trie data structure .