Recently, during the migration to React 17, I had a problem between event listeners handled by React and one added document manually. It was due to this part on the React 17 release note.

At this moment I understood that I had a misconception of how React handles event listener. So I decided to explore the React code to understand how it works.

Before going deep in the React codebase, I would like to explain what was in my head about the management of event listeners.

For example when I write this simple code:

In my head, React was doing under the hood, something like:

How it really works

After reading the React 17 release note. I was like "What? React was attaching event handlers on document and now on rootNode.

React has lists of native events that are handled presents here.

From these lists, at runtime, some objects are initialized here and are:

This map is filled by this process.

Actually the event handlers registrations, are made during the creation of the root (also named container) node fiber.

Let's look at the entry point in your application, where React is initialized:

The render method, in the react-dom code, is here.

Going in the legacyRenderSubtreeIntoContainer method, we can see that there is a different process if it's:

How does React know if it needs to create the fiber tree? Actually React store in the root dom node, a key named _reactRootContainer.You can get it in your browser by typing:

Note: We can see that not all events are added with capture mode.

What are the added event listeners? By going a little deeper in the code, we can see that the listener is created by the method createEventListenerWrapperWithPriority. We can then see it depends on the priority:

But all these listeners call the dispatchEvent method. Which will then call the attemptToDispatchEvent function. This is the method that interests us :)

And now we can see in the browser that React added the listener to the root DOM node in developer console: 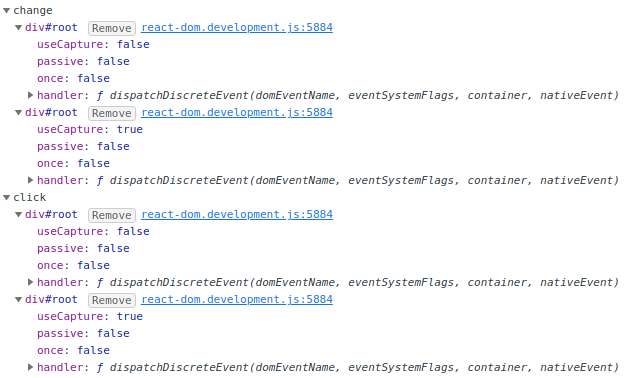 Trigger of this event handlers

Now that we know how and where React add event listeners. The question we can ask to ourself is: _How the callback I put on the onClick property of my button is called.

We need to know some magic that React does on DOM nodes.

Actually React put on DOM nodes a reference to the Fiber node under a key which is dynamic internalInstanceKey and props under internalPropsKey.

**Note: ** If you want to know the value of internalInstanceKey and internalPropsKey you will have to add a debug point on react-dom code to get it.

How to go into the react-dom code? You will need to install the React Developer Tools and then follow this little gif:

Then after refresh, we finally can get the wanted values:

Warning: If you refresh again the page, it will not be the same values!

With the following example, what does it happen when clicking on the button:

We have seen previously that the listener added by React will call the method attemptToDispatchEvent.

Note: The target will be the clicked element and the currentTarget the root DOM node element (on which the event listener is applied).

Then it calls dispatchEventsForPlugins that will finally extractEvents. These event with their listeners will be put in a DispatchQueue which is an Array of DispatchEntry:

Then this dispatchQueue will processed by executing these listeners in order in the processDispatchQueueItemsInOrder method which do basically something like:

Note: As you can it's a special event type that is stored in the DispatchQueue: ReactSyntheticEvent that we will talk later.

But how and what is put in the DispatchQueue?

The events with their listeners are extracted here. From the domEventName, we a ReactSyntheticEvent which will wrap the nativeEvent:

Then the listeners are accumulated. The process is basically:

Note: Basically it traverses the fiber tree node, from the target node to the root node element.

Why are nativeEvent wrapped? It helps reducing cross-browser inconsistencies.

Here is a little gif to understand the process to get listeners and fill the dispatchQueue:

So to conclude React does not add event handlers on each DOM element on which we put a event handler like onClick, but only the root node have all event listeners that React knows handle the event.

Then when the user trigger the event, the event listener is called. From the target of the event, React can get the Fiber node because it puts reference to Fiber nodes in DOM nodes into a dynamic key. From that Fiber node, React goes up in the tree, to get all listener that match the React event name and put them in an array (a dispatch queue). Then all the callback from that dispatch queue are executed.

If you want to see more: