On Saturday we wrapped up the Northeast Scala Symposium: a community-run conference related to the Scala programming language.

Going "online-only" at the last minute

On Tuesday, having sold 170 tickets to a conference starting Thursday at a venue in DUMBO, we decided to go "online only".

It's possible we should have made the call earlier. As is, some ppl were able to cancel their travel plans, others had already traveled, and (seemingly most) others had canceled on their own (or their employers had done it on their behalf).

We watched closely what other events were doing; we were much smaller than many of the big-name cancellations, and thought we might still be able to offer a remote option while meeting in-person with whoever was comfortable doing so.

When confirmed cases and lockdowns came to the NYC area, we quickly decided to cancel the physical event.

Cancel all the things

That required canceling our {venue, A/V, internet, security, catering, videographer} about 36hrs before the event.

All of those sectors are having a very bad time right now, of course, and we're basically following their lead about whether we should be refunded for any, some, or all of what we paid. In at least one case, we've been offered a full refund but are planning to insist they take some partial payment.

Elsewhere, things are presumably more contentious; one of our vendors shared an anecdote about a negotiation involving [a much bigger, more expensive event] and [a big, canceled hotel-room block] that has already turned litigious.

We're a small event with a lot of good-will between sponsors, attendees, and vendors, so I'm optimistic everyone will feel reasonably whole.

We primarily relied on Zoom (videoconferencing) and Slack (group chat):

There were also been 5 "breakout rooms" anyone could join and talk in. After the conference on day 2, ppl gathered in one of those for an e-"happy hour" (I was tired and didn't stick around to see how it went, though). 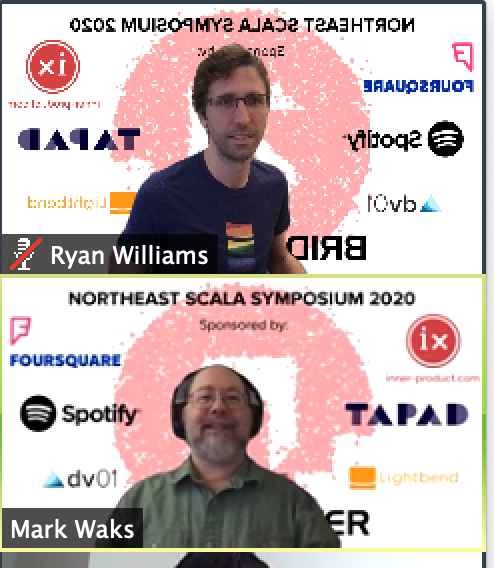 (NE Scala organizers chatting in the "webinar", complete with fancy "virtual backgrounds"; Zoom mirrors your view of your own background, to facilitate any interacting with it you may like to do )

Zoom recorded 8hrs/day of the main room ("to the cloud"):

Each evening I got a link to the raw footage, that I shared with the entire conference in Slack:

We'll probably stick with our videographer for post-processing the videos and getting them on YouTube (as originally planned), but it's pretty cool to have the footage available immediately as well (some speakers can probably just slice out their talks and share them as they see fit).

Zoom rooms always have a "chat" feature (with fine-grained visibility permissions, per-message); in addition, "webinars" have a structure "Q&A" window: 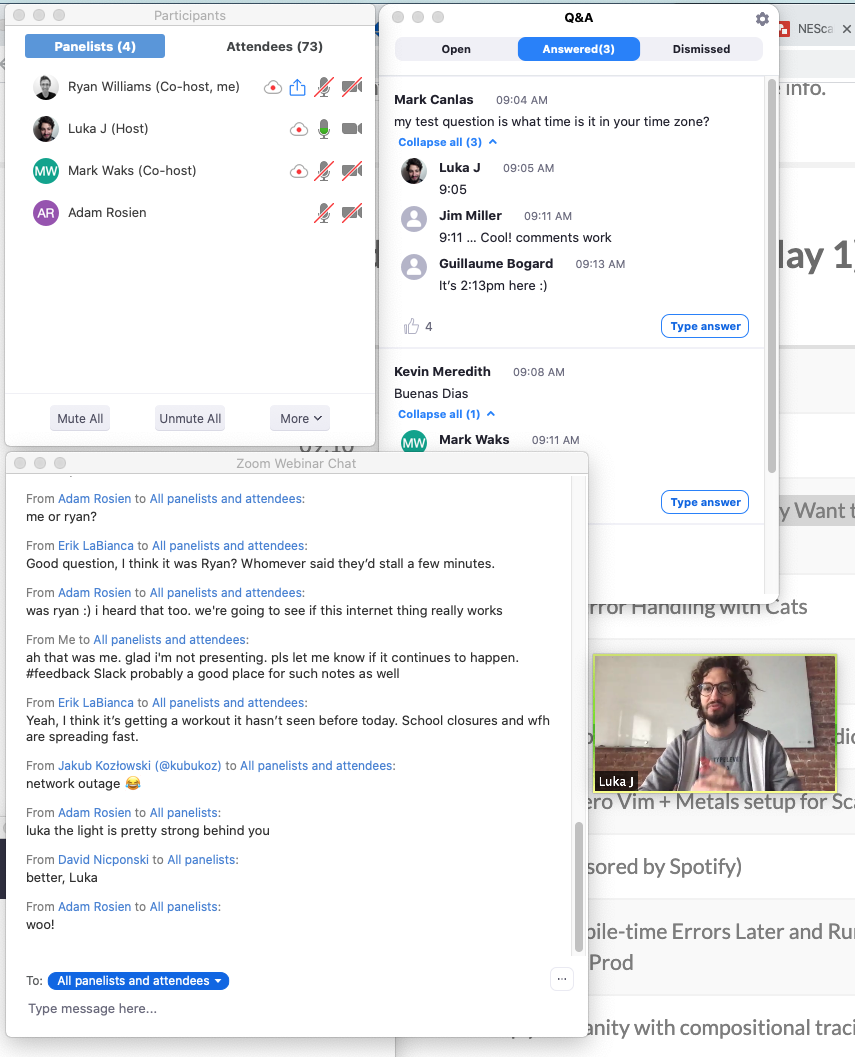 Questions and discussion about each talk were split between Zoom chat, Zoom Q&A, and our Slack "#talks" channel. This was all new enough that we decided not to push people too hard to any single channel. Some reflections:

Zoom has a huge number of settings available:

Many are available at both user- and account-level granularities. My programmer-brain respects the extensive customizability, but something about the UX was off; some settings depend on others in unclear ways, and some things appear in two different places (e.g. recordings "to the cloud").

We also leaned heavily on Slack for group chat.

We've used it to communicate with attendees, and among organizers, for years, but this year attendees and organizers alike brought some extra energy to make it feel like a real community:

A lot people's work-Slacks are much bigger and livelier than ours, but a couple reflections on choices we made and norms that emerged:

We suggested people "thread" discussions, but ended up with a mix of threaded and un-threaded discussion.

I'd guess ≈even splits between people that love threads, hate threads, and [are confused by the UX so don't use them].

We tried to use "pinned msgs" in each channel to make impt high-level info quickly visible (esp. to new members):

(Lots of good "annouce"-y content was available, if you knew where to look)

It should have been a good system; I'm not sure anyone really noticed or used them though.

I frequently used the pins to refer back to impt info (often to copy+paste a URL for someone who was asking, bc they'd not seen the relevant pinned msg).

The UX around them probably needs to be more prominent; I've used Slack for years and learned about pinned msgs while poking around last week.

I was grasping at every bit of markup I could deploy to highlight, nest, and group info in "announce"-style msgs: 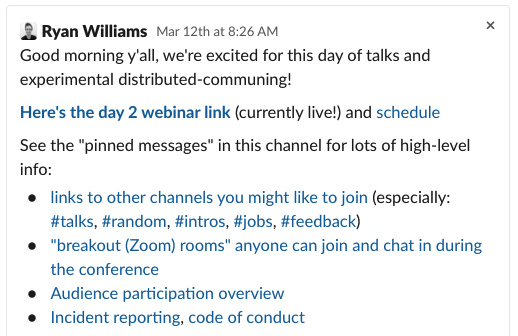 "Free" as in "search history"

Slack worked really well, though we're somewhat awkwardly stuck on the "free tier" (capped at 10k msgs across all users+channels); 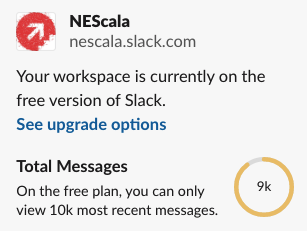 When we hit 10k msgs, we'll start [losing access to our earliest msgs] or paying ≈$1700/mo for our ≈250 Slack users, I guess? We might qualify for Slack's non-profit or education discounts, but it was all our volunteer corps could do this year to have an LLC and bank account up in time to invoice sponsors, receive ticket payouts, and pay vendors.

[Some] hands on deck

During the conference-days, we typically had 2-3ppl focused on running the event, performing 2-3 logical roles:

We planned to have more folks available, but several ended up being sick and/or taking care of kids who were unexpectedly home. Some attendees really stepped up to help with duties, which was much appreciated.

No sooner had we announced our move to "digital only" than I took delivery of 230 NE Scala 2020 t-shirts: 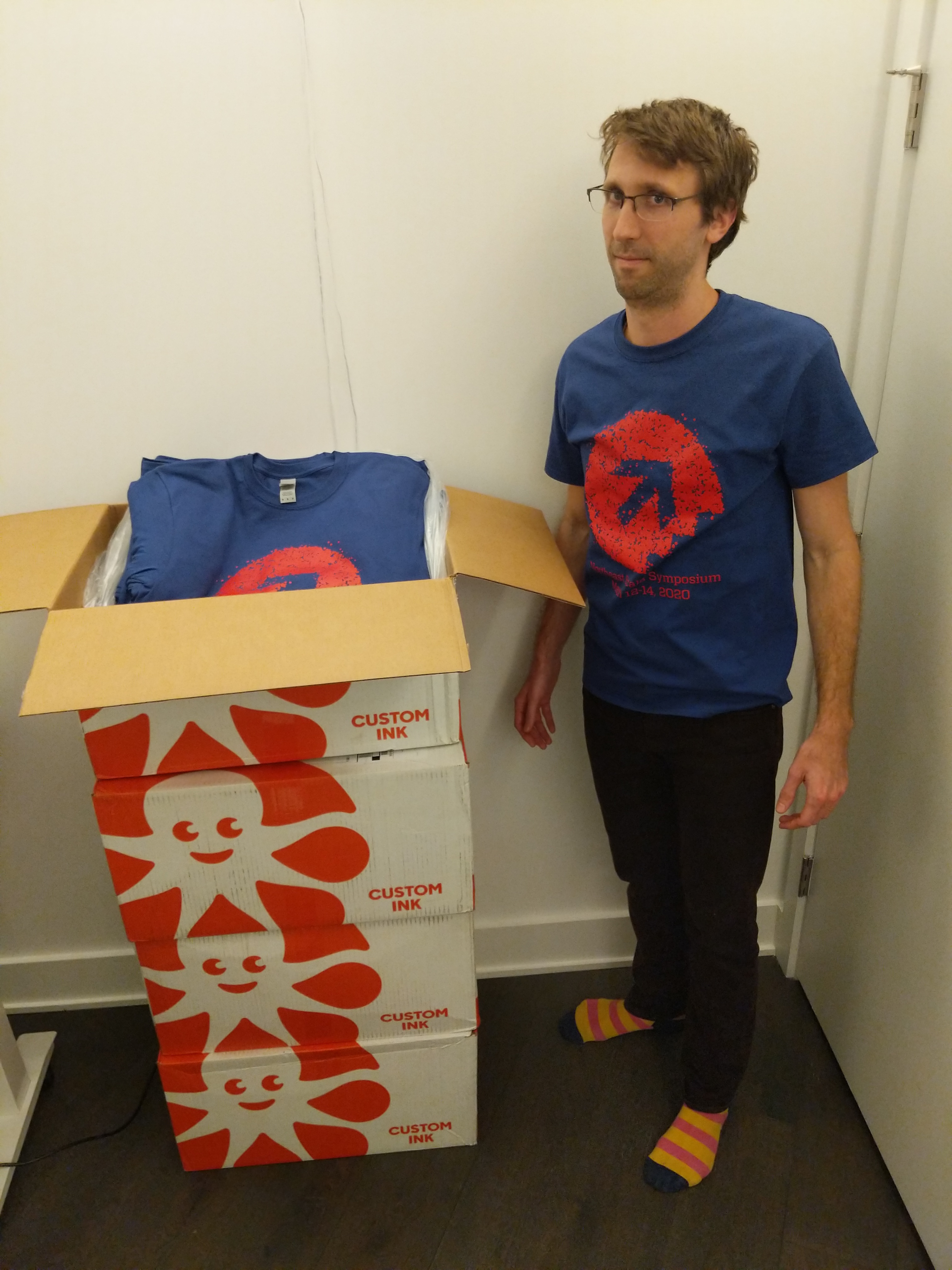 (it seemed like a good idea at the time)

We got the shirts from customink.com. They were good to work with; the shirts ended up being $7.92ea ($8.71 w/ "rush" 1-wk shipping) after they fixed up our design, post-order (simplifying and removing some colors to bring the price down). 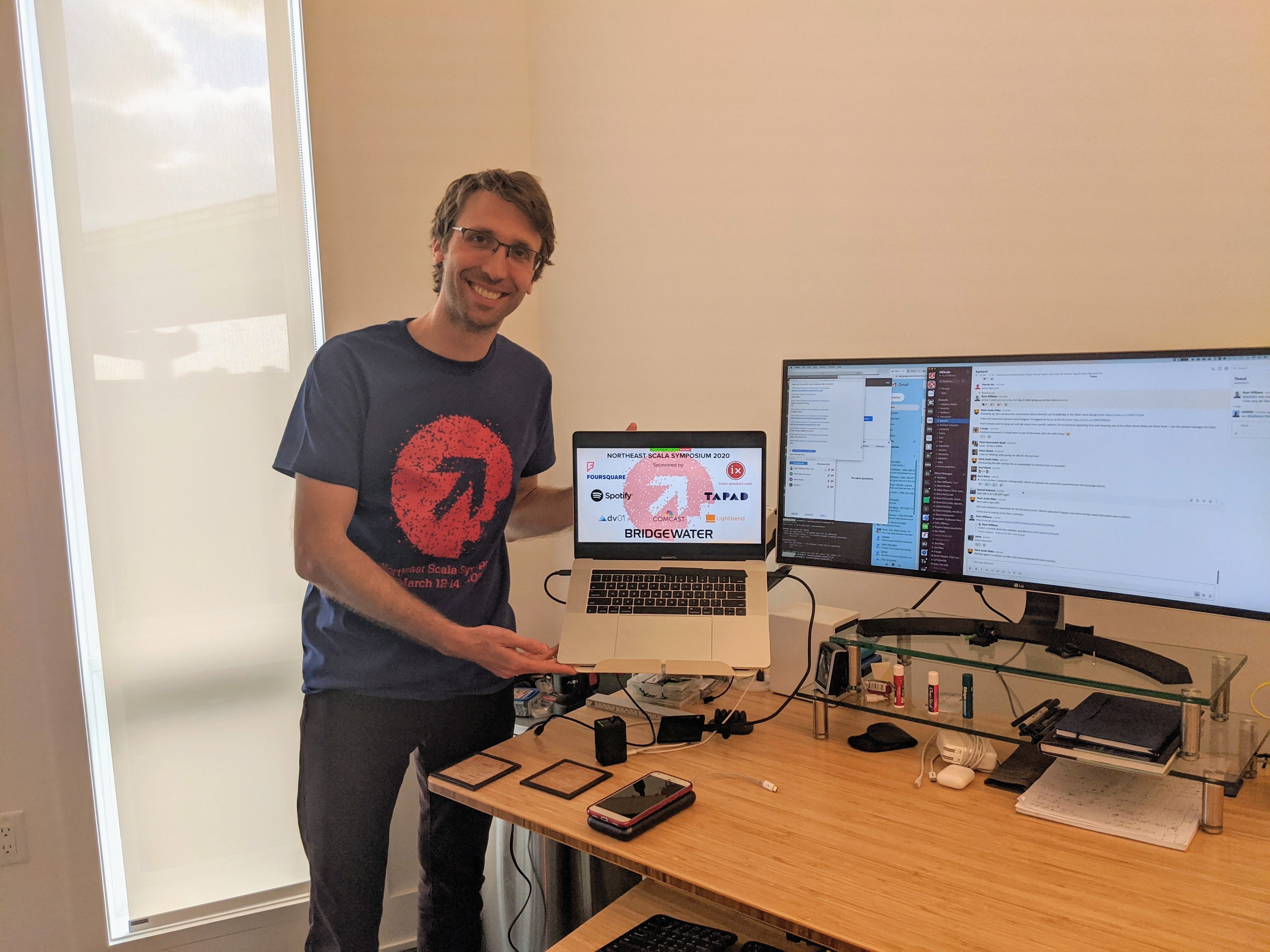 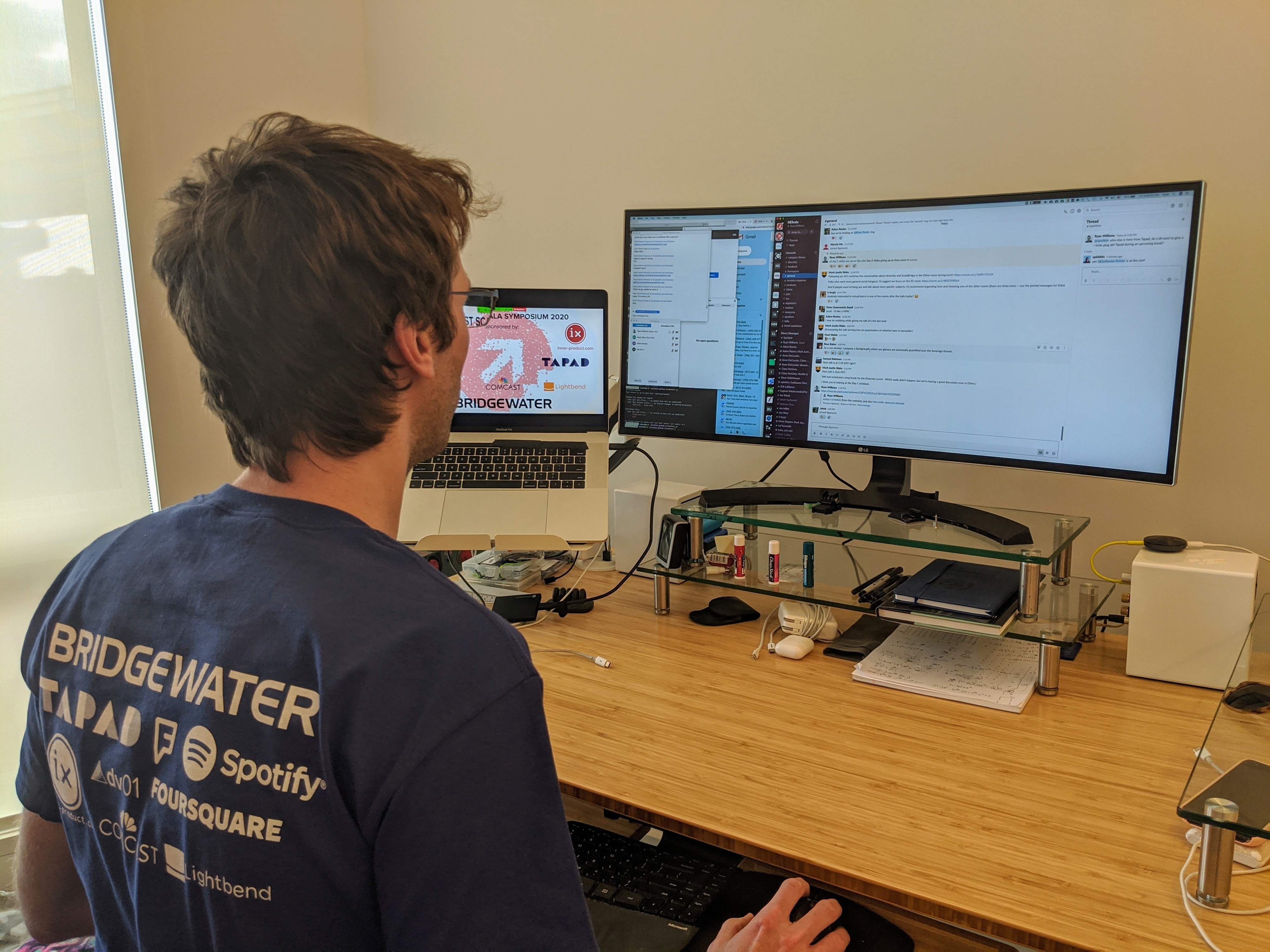 (confirmed: the shirts are good 👍🏻)

Maybe I can get my co-organizers over for a t-shirt-mailing party next wknd 🤞🏻.

On the third and final day of the conference, we hold an "unconference": a collaboratively-edited google-sheet is opened to everyone in the morning, and they fill in {room x time-slot} cells with talks or topics they want to give or discuss.

Our 5 Zoom "breakout rooms" hosted those various smaller/less-formal talks all day (and most or all of them were recorded, for the first time!).

Working on this conference for months, and then moving the whole thing online at the last minute, was a wild experience.

People (including me) seemed mostly pleasantly surprised about how it went. It definitely missed some of the serendipitous networking interactions people love about physical conferences, though some of that was recouped thanks to a community effort to interact meaningfully online.

Online-only also fostered dynamics that don't have a direct analogues in physical space. For example, several dozen people could participate in (or just read and give a drive-by emoji-reaction to) a particularly funny or lively Slack conversation (while real-life conversations cap out at much smaller sizes): 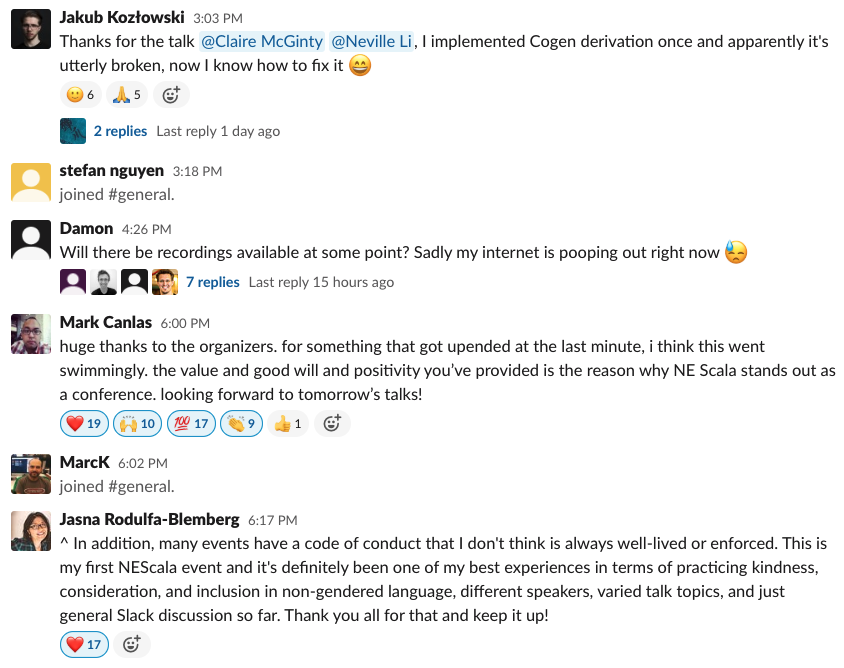 (keeping everyone on the same page)

However, we're also anticipating continued demand for attendees and speakers to participate remotely (there were many discussions around this for 2020 even before COVID19-related concerns really flared up).

Keeping the remote community active online through the year is also a newly-appealing proposition.

Seeing how possible it may be to run our event remotely – and spread our communing temporally outside the 3d of conference – has been very eye-opening, and we hope you've found this debrief about our experience useful or interesting!

Our sponsors and community have been really generous and wonderful through this whole roller-coaster; thanks again to them and everyone who participated! 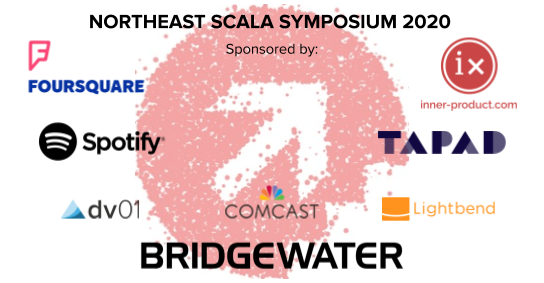 Appendix: useful tools during the lead-up to the conference

Below are experience reports about various other tools we used to run the conference:

(refund requests were trickling in over the last week, but new ticket sales basically kept pace with them)

We used Papercall to run a CFP for each of the first two days of the conference:

(historically, the conference is two separate events, that now always co-locate; we still "ship our org chart" in some ways)

Papercall worked pretty well, though I ended up writing a scraper to get the talk details out, followed by some pandas to munge them and dump out a "Proposed Talks" HTML page and "ballot" (a Google Form; attendees vote on talks).

At the time, I needed to get the ballot out quickly, and scraping seemed faster than:

For the first time, we randomized the order in which "proposed talks" were displayed, wherever possible:

It was nice to remove a potential source of bias in that way, with relatively little effort.

The conference site is a static site hosted on GitHub Pages, and its source is public.

Most changes went through a PR/review flow, and I came up with a good system for publishing a "live preview" of a PR's changes:

GitHub Pages is generally an amazing service, though it could be more helpful when Jekyll builds fail for some reason. On one occasion, I pushed a few updates to some image assets (sponsor logos) and got a cryptic, non-actionable email that the site build failed: 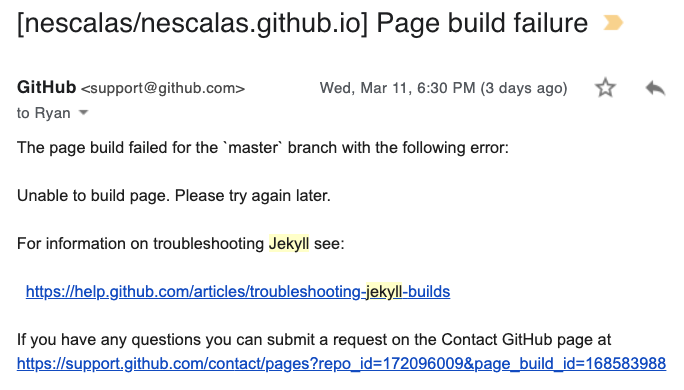 Re-pushing the images one at a time (was one of them corrupt in some way that was giving Jekyll problems?) resulted in only successful builds .

For some reason, we used our ny-scala.org (administered by Google Domains for a whopping $12/yr) to do email-forwarding, to give some veneer of formality to our emails with sponsors and vendors (and help us manage our personal inboxes).

This part was really clumsy:

It was also clumsy to not have a single email address, that all organizers had read+write access to, that we could cc or bcc on all relevant emails.

By the later stages, I was intent on there not being pertinent emails, on any topic related to the conference, that only one person was privy to (as it was, we had separate people email the same sponsor, confusion/misplacing of important details about vendors, etc). I ended up just cc'ing 4 organizers' personal gmail addresses onto every email I sent, which was not ideal.

We are a low-budget affair and have a very dispersed base of organizers (≈5, ≈10, or ≈30, depending how you count); I don't know if it would have made sense to make a GSuite account ($6/user/mo?) for organizers to use. Since there is little organizing or conferencing happening for at least half the year, I don't know if it makes sense to pay for any or many GSuite accounts year-round (and I don't know if there's a graceful way to only pay for them some of the time, but leave them dormant for part of the year?)

It could be that we should think of this as the cost of doing business. It's also possible that there is a better deal for non-profits, if we officially went this route (hopefully we will, later this year).