Weather was a hardware challenge on Google CTF 2022 that was based around a weather station running on a microcontroller with attached sensors and a serial interface. The goal was to extract a flag from an internal ROM device.

For the, challenge we were given a datasheet containing details about the microcontroller, its attached devices and the interfaces available. We were also given the firmware source code written in c. 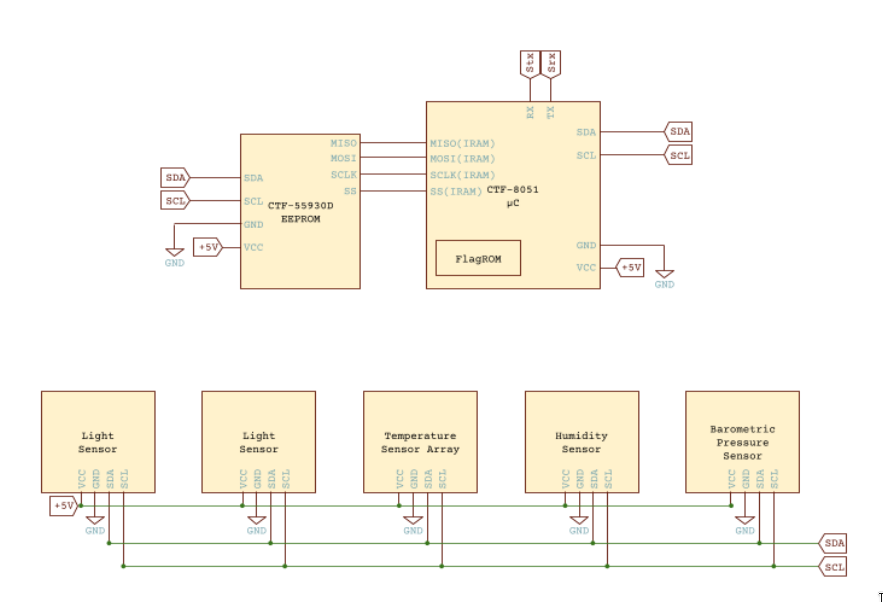 From the datasheet we can determine the following information:

The microcontroller has three interfaces available: I2C for attached sensors, SPI for XRAM (external RAM), and UART for user communication with the weather station.

The XRAM attached through SPI, is a CTF-55930D, a 32K EEPROM storing the running program with an additional I2C interface (!).
If we were to write data to the EEPROM, we would not be writing actual bits but would be sending the EEPROM information on which bits to clear.

The microcontroller also has an internally attached ROM containing the flag which can be accessed through special registers in the memory space.

We have the following sensors attached through I2C:

We can also get some clues on other parts of the setup:

The microcontroller is called CTF-8051, which together with the Special Function Registers hints at the controller being some form of an 8051 processor.

From the firmware sources, we can determine how to interface with the weather station.

The first thing we could do knowing the goal was to try to find any references to flag ROM from which we want to read data, but outside the definitions of FLAGROM_ADDR and FLAGROM_DATA registers they were not used anywhere in the program so we will need to find another way in.

The communication is performed via UART (accessible through a network socket in our case) and after a prompt we can perform two actions:

The address provided in the command is checked against a list of predefined addresses:

The code checking if our address is allowed is flawed though, it only checks the first 3 bytes of our input as all the predefined addresses are 3 bytes long. With the knowledge of that, if we were to send an address like 10100000000, it would get accepted as a valid address but would zero out the v variable in str_to_uint8 as after parsing the 101, it tried to parse our zeros into the number as well allowing us to then append an arbitrary address after it.

With the ability to communicate with arbitrary devices, we can scan all the possible 128 addresses if there are devices present with code like the following:

With it we can discover a new unknown device at address 33. Based on the diagrams from the datasheet, it is very possible that it is the EEPROM containing the running program.

To verify that theory we can try reading the data pages from it following the instructions from the datasheet:

Reading data from a 64-byte page is done in two steps:

To do that we can use code like the one below:

With some data returned, we can try dumping all the 64 pages of it.

Now that we have the memory dumped, we can see what is inside it.

This means that we did indeed dump the program memory.

Taking control of the device

With access to the memory of the device, we can now see a way how to extract the flag out of the internal ROM.

To get some shellcode we can use sdcc which will produce a listing file (.lst) which will contain a program listing for our compiled program with instruction bytes, source code lines and other relevant information inside it.

The exploit code has to read the flag rom byte by byte and output the data into the SERIAL_OUT_DATA register for us to read it.

Then after compiling our exploit code with sdcc exploit.c, we can view exploit.lst to read out the instruction bytes for our exploit.

Writing our shellcode into memory

Near the end of program memory, we can see 24 pages filled with FF bytes which is a perfect place for us to write shellcode that would sequentially read bytes out of the flag rom and would send them to the UART interface.

It's the perfect place because as it was mentioned previously, writing data to the EEPROM is actually done by sending bits to clear, there is no way for us to set a 1 if it was cleared before. This place in memory lets us write exactly what we want without any larger constraints.

To write our data into a page with a bunch of FF bytes we can yet again turn to the datasheet to find out how to do that:

Programming the EEPROM is done by writing the following packet to the EEPROM's I2C address:
<PageIndex> <4ByteWriteKey> <ClearMask> ... <ClearMask>
The PageIndex selects a 64-byte page to operate on. The WriteKey is a 4 byte unlock key meant to prevent accidental overwrites.
Its value is constant: A5 5A A5 5A. Each ClearMask byte is applied to the consecutive bytes of the page, starting from byte at index 0.
All bits set to 1 in the ClearMask are cleared (set to 0) for the given byte in the given page on the EEPROM:
byte[i] ← byte[i] AND (NOT clear_mask_byte)

With that known, we can write a helper function to write given data into the EEPROM:

And to test it, we can write our shellcode into the first page which contains the FF bytes:

Finding a way to run our shellcode

The other problem is getting the shellcode to execute. If we were to place it at address 0xa00 (page 40), we could perform an LJMP 0xa00 instruction which according to the 8051 instruction reference would be 02 0a 00.

Knowing that we can try to find a place in main() that would allow us to clear some bits to turn some instruction into our jump.

First, we can try to correlate the data we dumped from the memory with a compiled version of the firmware. To do that, we can compile the firmware.c with sdcc and use the resulting listing again.

In the listing we can find that the main loop starts around the address 1099 (0x44B):

Then we can loop over the program bytes trying to find a place which we can use for the jump:

And with the position of a viable jump known, we can then overwrite the instructions with our helper write function:

Then, with our jump written we need to send any valid command for the program to get to our jump:

And with that, we get a dump of the flag ROM: