This describes the playbook for running the DevOps Ball Point game as shared by John Clapham on Twitter.

Pass as many balls as possible through the team into the paper cups.

This playbook is targeted to a team of 14 people inside an IT organisation.

3 people play the game demonstrating how it works for everyone in the room.

Grow the team to 6 people and play the game.

question: should we hold a retrospective after iteration 1 and 2 ?

Typically no, these iterations are just about establishing the story and showing people how to play the game.

Form 2 teams of 7 people each keeping the founders in the same team:

Add the Wall of Confusion: teams can only pass the ball to each other through one touch point. 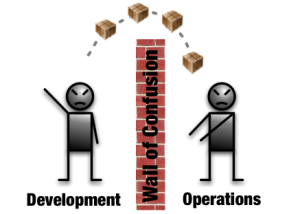 question: should we use a paper cup as touch point ?

That's an interesting idea - making it harder to cross the wall would reinforce the damage of the bottle neck. My guess is that this would confuse people because cups would have two purposes (servers at the end of the line, and at the wall), practically it might also be too hard - the wall shouldn't make play stop all together.

Development aims to pass as many balls as possible. Operations aims not to drop a single ball.

question: at this point shouldn't the teams have a joined retrospective to prepare for the following iteration ?

The aim is is to get the teams realise how damaging the wrong incentives are by encouraging them to optimise for the team's goals rather than the organisation. As such I'd recommend they retro separately, the act of either a)thinking up even more destructive habits or b)releasing they need to join up, should reinforce learning.

Incentives are now joined for both teams: pass as many balls as possible without dropping a single ball.

Remove the wall. Remind the people of the feeling of uninterrupted flow.