Our development machines here at Point2 are not standardized; we have a mixture of Windows XP, 7, and Mac OSX/Unix computers. I find myself constantly switching back and forth between command prompt interfaces when pair programming. As a result, I catch myself using “ls” to list a directories contents regardless of what system I am on. I am currently using a Windows XP machine for my developer box and I wanted to setup an alias to the “ls” command to actually perform a “dir”. Here is how I accomplished it…

There is a command available in a Window’s shell that let’s you “alias” command to whatever you please: DOSKey. It allows you to create “macros” to execute one or more other commands with a custom name. If you open up a command prompt and type in the following, you will now be able to use “ls” to list the current directory’s contents.

It also handles command line arguments, either by index or as a collection using * respectively. This allows you to do things perform a “dir” command every time you change directories. This example would be done with the following macro definition.

This all sounds very simple and easy until you close your command prompt, open a new one, and realize all of these macros you defined earlier did not persist between instances. The DOSKey command does not save these alias automatically. The DOSKey command does support saving the “currently defined macros” to a file which will allow you to run a simple command in any new shell to load macros from any saved file. The problem is, I already forget to use “dir” instead of “ls” so I know for sure I will not remember to run a certain DOSKey command every time I open up a new command prompt. I needed something more automatic.

I investigated what options I have for running commands as part of every run of cmd.exe. I found out there is a command line argument, \K, that I can use on cmd.exe to tell it to run a ‘.cmd’ or ‘.bat’ file to run commands on startup. So you can run something like to following command to load a shell instance with the following command file being ran automatically.

This allows you to add all of the commands you want into that file and have them run automatically for the command prompt you are about to open. In order to pass this argument, I created a shortcut to cmd.exe in my Quick Launch toolbar which I could modify and use exclusively for my command prompt instances. This can easily be done by going into your C:\WINDOWS\system32 directory, right-clicking on cmd.exe and selecting “Send to Desktop”. Right click on the newly created shortcut (on your desktop) and select “Properties”. On the Shortcut tab, you will find the “Target” field which you will have to modify to include the command line option. Here is what my configuration looks like: 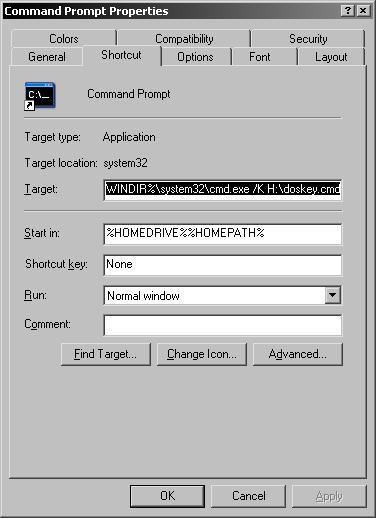 The only other thing from my configuration worth mentioning is the “Start in” setting I have specified. The value “%HOMEDRIVE%%HOMEPATH%” will open the command prompt in your user’s home directory as opposed to the default which opens the new window in the system32 directory which usually isn’t very helpful.

My doskey.cmd file is also worth taking a look at. It only currently has a few alias for common Unix commands but it will give you a good idea of what kind of things are capable.

It is probably best to also include the “@echo off” at the top of your script too just so you don’t have to see the noise in the shell running your script. There are also a lot more powerful features to DOSKey that I have yet to experiment with but you can see how easy it is now to add permanent macros into your command prompt.

Another thing worth noting is that you should look at the other tabs in the cmd.exe Shortcut Properties window because it makes it easy to do things like increase the buffer size of text for the shell, change font sizes and color, as well configure the behavior of command history tracking. After tweaking with all these settings, here is my new custom, improved Command Prompt: 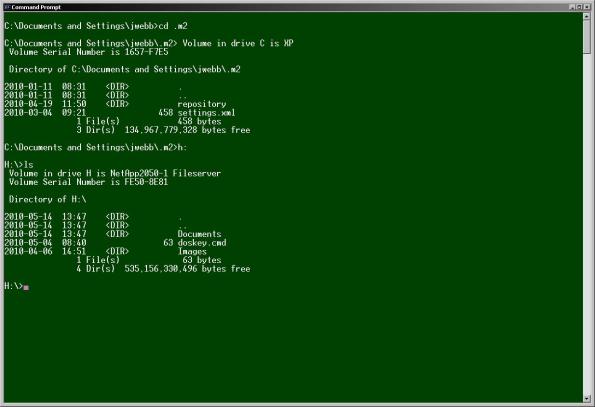 The only “gotcha” here is that you have to open command prompt window using the Shortcut but there are other tools available which will let you run Shortcuts a simple keystroke so this should not be an issue. I hope this makes every Window’s Command Prompt user’s life a little easier. :)