Other than scaling out, which TiDB is already capable of, the ability of scaling up by embracing new generation hardware will be extended.

As an HTAP database, TiDB is able to process analytical queries efficiently. At certain points, however, CPU becomes the bottleneck of processing queries, such as join, aggregation, etc. on large amounts of data.

On the other hand, GPU is rapidly gaining popularity in areas of scientific computing, AI, data processing, etc. It out-performs CPU by orders of magnitude in such areas. There are also GPU-accelerated databases emerging, such as Brytlyt, BlazingDB, Kinetica, OmniSci, and SQream.

Now is the time to explore how GPU can accelerate TiDB for processing CPU-intensive queries. 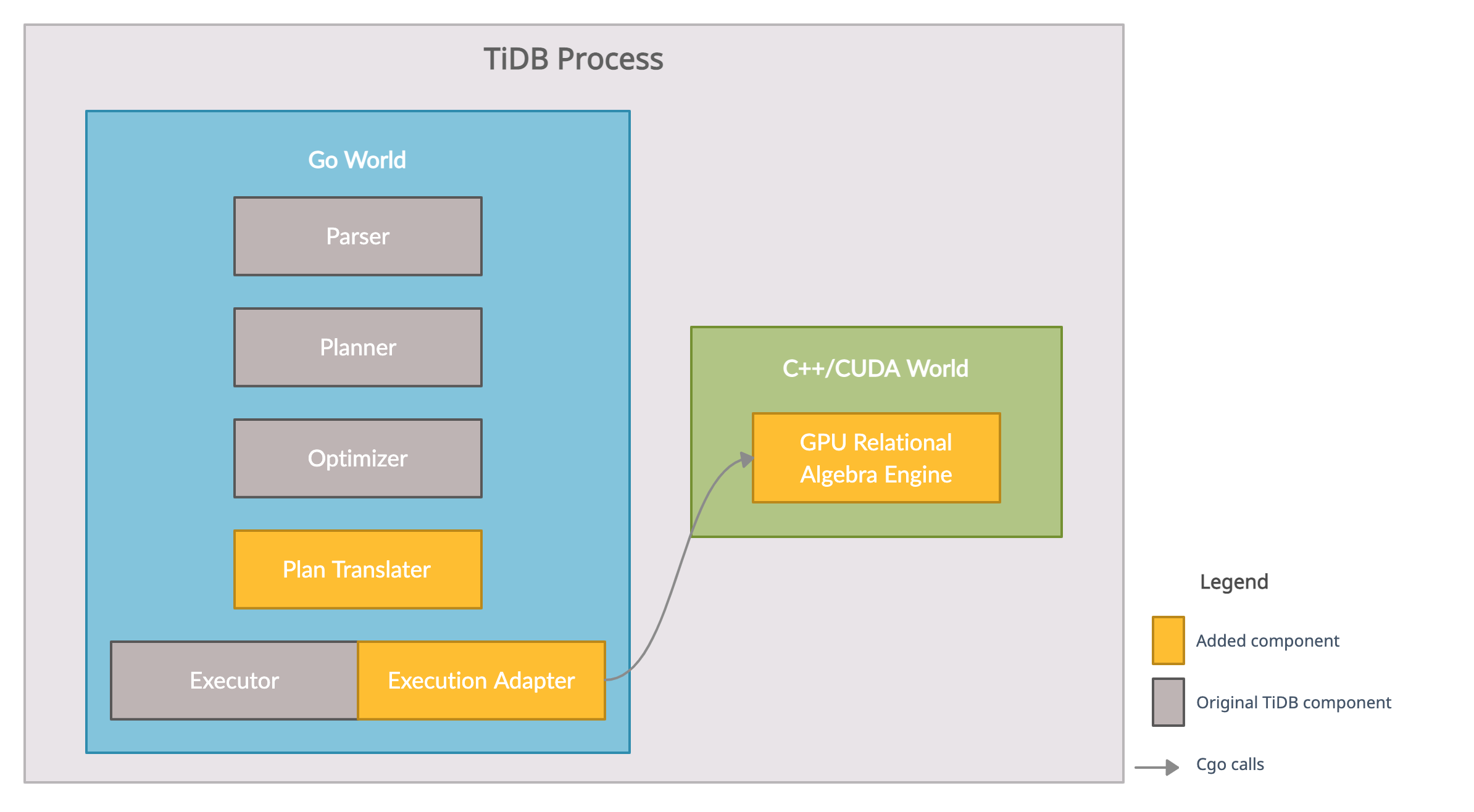 As the above figure shows, the architecture of the proposed approach contains three components:

The essential consideration of making it an individual component is that there is a programming language boundary between TiDB (in Go) and GPU programming (in C/C++/CUDA), which is difficult to cross. Therefore GRAE is implemented using C++/CUDA. Beyond that, GRAE is built as a library rather than a service so that there is no overhead of RPC and network transmission. In order to finally cross the programming language boundary between Go and C++/CUDA, a group of simplified C APIs are exported for EA to call via Cgo.

Data is fed into GRAE via the C APIs. It is assumed by GRAE that data is resident in host memory and of the Arrow layout. Data processed by TiDB operators is organized as Chunks, which are memory resident and of Arrow-compatible layout, so it can be fed into GRAE in a zero-copy way.

PT is implemented within TiDB using Go, specifically as another pass after regular optimizer. The translated GRAE plan reflects how the query should be executed by GPU, i.e., when to execute which operator in GRAE, how much data from which table to feed into the current operator in GRAE, etc.

EA adapts TiDB execution model, i.e., the organization of various executors in TiDB, to the execution of the aforementioned GRAE plan.

EA is implemented within TiDB using Go, specifically as an individual executor like any other kinds of executors for various TiDB legacy operators. It traverses the GRAE plan to execute GRAE operators by actually calling GRAE APIs via Cgo.

During the query execution, the interoperation among EA and other executors is in original TiDB manner, i.e., EA pulls data from downstream executors, processes it in GRAE, and pushes data to upstream executors. Within EA, data in-and-out GRAE is all through parameters of GRAE API calls.

TPCH is used to benchmark the performance improvement of GPU against TiDB’s legacy CPU implementation. Rather than the complete 22 queries of TPCH, only the most CPU-intensive ones, such as q5, q9, q17 and q18, are chosen due to engineering effort and the limited time. Besides, some customized simple queries are made based on the TPCH data set to show a more straightforward result of the performance gain for a specific kind of operator.

As disk IO takes a large amount of the whole execution time, the performance improvement of GPU against CPU will be greatly amortized. TiDB’s Coprocessor cache is used as a workaround to bypass disk IO. In this way, the Coprocessor cache acts as a memory store, making TiDB a “hypothetical” in-memory database.

The following topics are left open: