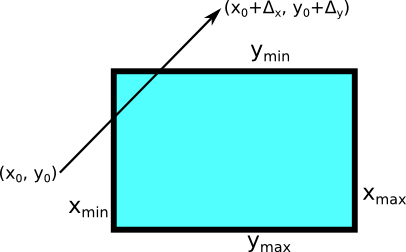 In the latter two cases, we want to know the points of intersection.

Similarly, let u_2 be the smallest value of t_k for which p_k > 0. This is the time at which γ leaves the rectangle, if it ever entered.

We can now distinguish between the four cases:

Depending on your situation, you might not need to consider all these. For example, I'm doing collision detection: I can assume that the line segment starts outside, and if there's a collision I don't care where it would have finished. So if u_1 < u_2, I'm only interested in γ(u_1).

Since everything depends on u_1 and u_2, we should verify that they will always be well-defined. That's easy to check. Recall that u_1 is

Here's my implementation in Haxe. (And the context.) It returns a boolean, and if there is a collision it stores it in a variable which the caller can then read. I don't worry about the case Δ_x = Δ_y = 0, because in this particular game that shouldn't ever happen with the point inside the rectangle. (Famous last words... if it does happen, it will report a collision at (-∞, -∞), and that's about as good a response as any.) Variable mapping: x_0 and y_0 are just x and y; Δ_x and Δ_y are vx and vy; x_min etc. are left etc.; k is i; t_k are only needed in the scope of a for loop, so they're each just called t.