I got paid about $10K for my last project. The guy who paid me anticipates he will make $100K from the site within the first year. I don't know if he actually will or not, but it seems plausible to me. He did basically no work -- he supplied the idea and the capital and I did everything after that. I'm definitely not criticizing the guy -- he's great -- but the disparity in money per unit of effort is very striking.

This got me wondering... what percentage of revenue do most companies pay to the people who write their code?

I did some rough back of the envelope calculations below. I don't know if got the numbers quite right, but I do think it's fair to say that software is pretty much dirt cheap.

If you take the amount of money Google pays to all of its software engineers combined, it adds up to about a fifth of what they pay to Apple to make Google be the default search engine on iPhones.

I talked about WordPress plugins in an earlier post. I've been thinking they might be a good business opportunity. The most popular WordPress plugin is used on 5 million websites. It costs $0. Apple sells over 200 million iPhones every year.

I've talked to several eCommerce companies about potentially building software for them. They care way more about manufacturing and inventory than they do about software.

The lesson I've been slowly learning: I need to focus much less on software and much more on business.

How much does Google pay all of its software engineers combined?

And found this document https://abc.xyz/investor/static/pdf/20190725_alphabet_10Q.pdf

Which contains this table: 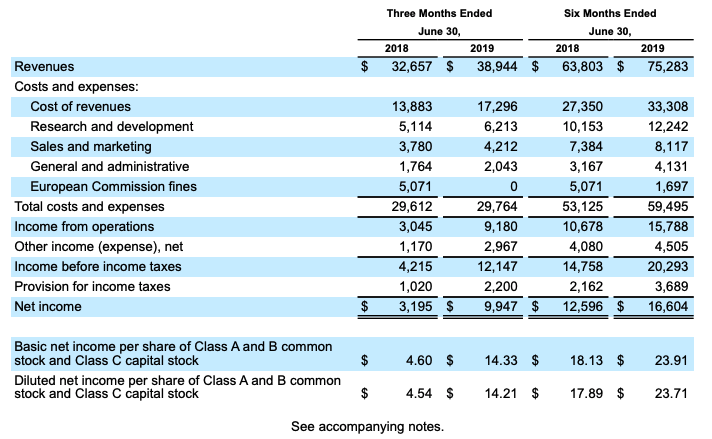 I think salaries to software engineers would fall under "Cost of revenues" and "Research and Development". In Q2 of 2019, they spent $17 billion and $6 billion on each respectively.

Further down in the document it says, "Cost of revenues was $17.3 billion, consisting of TAC of $7.2 billion and other cost of revenues of $10.1 billion."

I looked TAC up, and it means Traffic Acquistion Cost, which basically means paying Apple to make Google be the default search engine on iPhones. That's eyebrow raising, but doesn't answer the original question.

Ok, so I guess software engineering salaries must be some part of that $10 billion remainder. Further down they say:

• Content acquisition costs primarily related to payments to content providers from whom we license video and other content for distribution on YouTube advertising and subscription services and Google Play (we pay fees to these content providers based on revenues generated or a flat fee);

• Expenses associated with our data centers and other operations (including bandwidth, compensation expenses (including SBC), depreciation, energy, and other equipment costs); and

Ok, so they don't detail the size of each bucket, but I guess you could just assume it's a relatively even split? So maybe they spend:

Assuming the final $3 billion for "everything else" is split relatively evenly among the items listed in the parentheses in their second bullet point... you might guess the breakdown looks something like this:

Since the vast majority of Google's employees are likely to be software engineers, it would then be reasonable to conclude that maybe $500 million ends up going out to engineers in the form of salary.

I think the $6 billion R&D budget is likely similarly divided... so let's say there's another $300 million there.

That gives us a total of $800 million in software engineering salaries based on $39 billion in revenue... which comes out to about 2% of revenue.

I guess a much simpler way of calculating it would be to take their number of engineers and multiply that by a $100,000 salary.

Let's say they have 30K software engineers as of 2019: https://www.quora.com/How-many-software-engineers-does-Google-have

Yeah, it comes out to about the same.

1.7% of revenue goes to engineers

What about outside of tech?

From this I can reasonably conclude that the cost of software development is largely insignificant.