Last active
Star
Download ZIP
I'm your CTO! As a developer, here the rules I expect you to follow:
Raw
developer_principles.md

Like Robert C. Martin (clean architecture) would say on this video,

Imagine I'm your CTO, as your CTO I expect you to follow this principles: 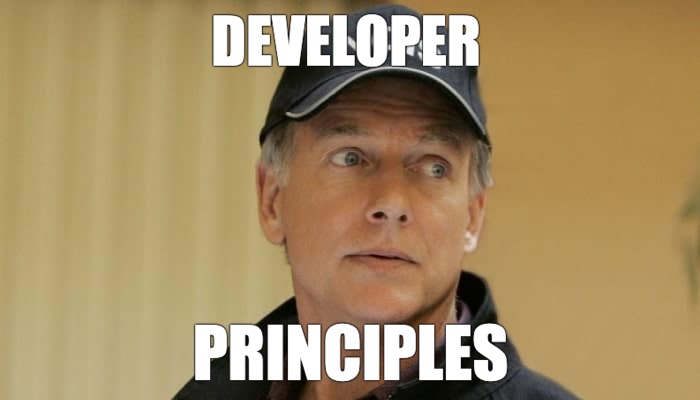 The most important rule. A program must be "maintainable" so "readable". Software is meant to change in constant time, not in exponential time. "Readability" is the first step to achieve that goal.

2. Explicit "Needs" first, do not over-engineer

Be pragmatic. Even if it's great to anticipate the futur when possible, do not produce dead code. Make the code evolutive to be able to modify it later. Keep it simple, easy to maintain, easy to adapt. Explicit what's your main "needs" first to avoid to produce code you will not need. Keep in mind that the sentence "if one day we need that" is a common sentence and often you will never need that.

3. Fail Fast: Crash as soon as possible with explicit message

Avoid side effects & Avoid silent wrong behaviours. When you detect something wrong, crash! When a variable, an argument or a field contains something wrong, crash! At first your code will crash, sure. But you will spot issue very fast. Then your code will be more robust and easier to read because in the range of all possibilities, side effects have been excluded. With "fail fast", you will the fix the reasons of crashes, not consequences.

4. Be careful with "silent return" or "if" without "else"

We try to avoid as much as possible return that does nothing in method. Why? Often that the cause of issue difficult to spot. That's why it's better to crash when something is wrong than simply return. Here Linus Torvals point in video.

Like in real life. Most of object are immutable. Most of "chair" properties will not change during its lifetime, same number of feet, same color... Immutability makes object comparison easier. Creating a new object to change a property is totally OK. Having method giving you mutable data from an immutable object or the id of the object is also possible.

6. One source of truth

Multiple sources of truth lead to:

So be careful to:

A project splitted by feature instead of layer is more scallable. Feature packages/namespaces are "more standalone". In other words a feature can be easily deleted. Moreover that give to developer a better look of the feature scope and context.

Unit testable code will force your code to be designed carefully, less dependent of your platform and less inter-dependant. For pure "logic" code like Algorithm to convert decimal number to Roman Numeral, TDD is a great way to go.

What code must be tested:

What code must not be tested:

Unit-testable code doesn't mean all the code must be unit-tested. Indeed, the more your code is tested, the more that will be difficult to change your code. So please, do test only what's need to be tested.

Single responsibility principle. One "module", "class" or "method" should only have one role.

In the same way, for arguments, try to ask only what a function/constructor need. For example, on Android, do not ask a Context (that is a god object) when your only need is to convert a ColorRes to a ColorInt. Try to abstract the Color convert notion from the god object Context.

On a project, the less dependency on other SDK you have, the more robust your code will be. Why? Remember the cost of a library:

Having sayed that, of course you cannot re-code every library. But peek your library carefully =)

Same reason as the Split concern rule. Will make your feature easier to change, easier to delete.

To be more robust to change. A lot of juniors are using the "duplicate code is evil" principle. This principle is dangerous. If the code serves separate feature that means that the code will change for different reasons.

So copy & paste is more that OK. If you really want to factorise, do not use inheritance without strong notion of "is one". Otherwise use "composition".

"Generic" could be done via "generics". "Generics" is one of the most difficult concept of programmation (with covariance...). Please do not use generics uless you do not have other alternative. Why? Difficult to maintain, difficult to onboard developers. Remember the 1. rule: simple, easy to read.

17. Do not use tools you do not masterize

PROs and CONs of third-party libraries, new languages or external softwares must be known before taking the descision of using them. Adding new tool has hidden costs to be aware:

No excuse to not respect that. Wrong, you will not "gain time"! For a non developer, this point is obvious, for some developers, not so obvious.

Any git-repository must be better over time. Refactorization should be done continously. Architecture should be improved continously.

"Rush" periods are not an excuse.

No need to comment great code. Here the reason. Affordance in code is having your code self-explained by design.

Of course, sometimes, impossible to explicit what the code is doing only via method names, fields and variables. In these case it's OK to comment your code, but keep in mind it's an admission of weakness.

You may say, "OK, but for public API exposed to external clients, provide a documentation is better ?". Maybe, but again, most developper will read your documentation only if the API is not design with affordance in mind.

21. Do not make variable name, class name or package name impact the output (when possible)

I will take kotlin jvm example to hightlight this rule. In Kotlin, it's possible to have an enum, for example Color, and then to do Color.WHITE.name. name is a string that is "WHITE".

Using this name is breaking one of the main concept of the programation: split the "behind" and the "front". It's like breaking the fifth wall. That could be great sometimes, but thatt dangerous.

MR comments are not here to change every line of the MR. Please anticipate the work before with tech daily for example. The reviewer should not discover the code / archi.

24. Always improve your "best practices" WHY / HOW

In debate, the argument "because that was already done like that" is not an argument to use. In practice, of course, we need to make compromises and we cannot refactor every code base. Here my point is not to not follow project conventions. My point is to always understand the why behind to improve your future code. Think Kaizen. Avoid authority argument.

WHY / HOW Ask you "WHY" it's like that, "HOW" that could be done better

To go further, here are Android developer: Principles to complete this list.

Other articles and projects on Mercandj.