I saw this poll on Twitter earlier and was surprised at the result, which at the time of writing overwhelmingly favours option 1: 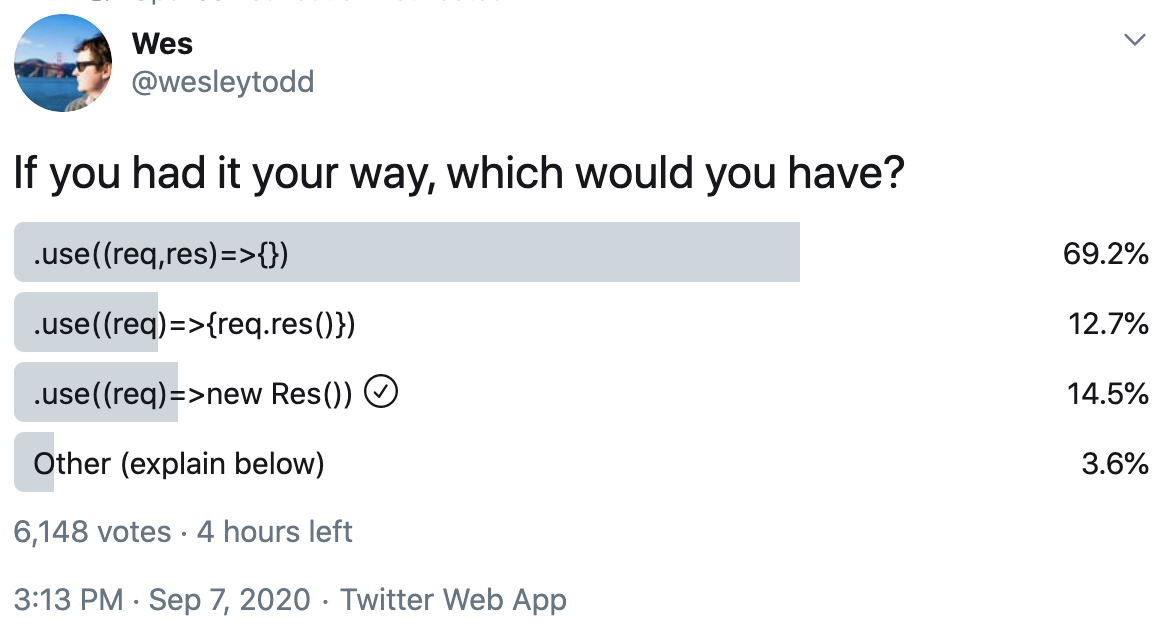 I've always been of the opinion that the (req, res, next) => {} API is the worst of all possible worlds, so one of two things is happening:

Why I dislike option 1

It's bad for composition in two ways. Firstly, for all but the most trivial handlers, you have to awkwardly pass the res object around:

Monkey-patching objects belonging to the standard library is no more advisable here than it was in MooTools, but it's endemic in the ecosystem around Node servers.

In addition, because the built-in res object makes it difficult to do something as straightforward as responding with some JSON, and because send(res, data) is awkward, Express apps use a superclass of http.ServerResponse that adds a res.send(data) method among other things. I'm really not a fan of this pattern. Libraries shouldn't (but seemingly sometimes do) assume that these extra methods exist, making it harder to combine logic from different places.

Passing the res object around is reminiscent of a pattern that used to be extremely prevalent in Node apps:

Nowadays the ergonomomics around asynchronicity are much better thanks to async/await, which means we can use a more natural approach: the return keyword.

Conceptually, a response to an HTTP request is basically the same thing as a value returned from a function. So why don't we model it as such?

Here, the returned value could be a new Response(...) where Response is some built-in object, or it could be something more straightforward:

(body could also be a Buffer or a Stream or a Promise, perhaps.)

This pattern lends itself to composition:

Middlewares can be composed the way Koa does it:

It's likely that I've overlooked some crucial constraints. But if we're looking at evolving the built-in Node HTTP APIs, I hope we can take this rare opportunity to do so without being beholden to the way we do things now.