Yes...it's true...redux is smart....smarter than you even know. It really does want to help you. It strives to be sane and easy to reason about. With that being said, redux gives you optimizations for free that you probably were completely unaware of.

connect is the most important thing in redux land IMO. This is where you tie the knot between redux and your underlying components. You usually take state and propogate it down your component hiearchy in the form of props. From there, presentational components can do their thing and paint the walls all things between red and blue. I'm focusing on connect here because this is where optimizations dwell...as do dragons.

The arguments to connect are very much worth paying attention to. One of the handiest variants of connect is the version that keeps your container component from subscribing to the store. That is to say...when the state tree is updated, the wrapped (i.e. presentational) component will never have to worry about prematurely rendering things. It'll just be set in stone throughout the app's lifetime, never having to react to anything. Here we'll focus on the docs for mapStateToProps:

That's pretty neat, but it gets much better!!!

If you've ever attempted to optimize a react app, you know that shouldComponentUpdate is where the magic happens. Two of my favorite articles on tuning are as follows:

A nice chunk of those articles highlights the benefits of shouldComponentUpdate and how you should take extra care when binding to props. For example, inlining fuctions and values as props can trigger unnecessary render calls, thus negatively impacting performance. Instead of doing stuff like <MyComponent items={['one', 'two']} />, which will lead to new props each time and make shouldComponentUpdate evaluate to true (thus triggering a render()), you're instructed to do something like:

This is so react doesn't think some mutation occurred. We point to the same reference (place in memory) each time, so shouldComponentUpdate will evaluate to false and no pointless paints will occur. If you read through the aforementioned articles, you realize what care you have to exercise when passing props to your components. That being said, wouldn’t it be nice to not have to care as much? Go for the kill? Enter redux and connect once more. In addition to mapStateToProps, mapDispatchToProps, and mergeProps, connect also accepts an options hash:

[options](Object) If specified, further customizes the behavior of the connector.

[pure = true] (Boolean): If true, implements shouldComponentUpdate and shallowly compares the result of mergeProps, preventing unnecessary updates, assuming that the component is a “pure” component and does not rely on any input or state other than its props and the selected Redux store’s state. Defaults to true.

By default, connect will give you shouldComponentUpdate for free!! From the Container Components sections:

That’s right...you won’t have to manually wire it up, which is GREAT!! But how do you best leverage this? As it turns out, you need to make granular usage of connect and your state. See this note from the docs:

Inject dispatch and every field in the global state

Don’t do this! It kills any performance optimizations because TodoApp will rerender after every action. It’s better to have more granular connect() on several components in your view hierarchy that each only listen to a relevant slice of the state.

We did just that at my last company (or in most cases a more explicit variant of it):

My preference of late is that for each piece of state you’re interested in, create a separate container component that receives it and delegates it to a presentational component. That’s basically what was recommended in article 2 up above. Initially there was a single component that was responsible for reacting to/rendering multiple parts of the state. One piece of state was a sequence of items, the other text inputed by the user. Each time the user changed the value of the input field, new state was set and the app was forced to render all over again. But why should the sequence of items have to be rerendered when something completely unreleated was changed? What's the fix? Split things out and have them act on the individual pieces of state that they’re responsible for. That’s exactly what the author ended up doing. As a result, if a part of the state tree changes due to user input, the component responsible for the list of items doesn't rerender and preserves its state. This is also the primary reason why so many people advocate splitting up your components in react land (although some take this to the extreme). It really feels like overkill in a lot of places. Why have a separate component with like 6 lines of JSX in it when it could very well be inlined into a sibling component? That’s why...so you can optimize and be more efficient. So how does article 2 map over to redux land? connect for the kill. redux provides what I like to call an “optimization line”. We were introduced to this earlier when I noted that connect will give you shouldComponentUpdate for free. Everything on the left side of the line is redux land (container components). It knows about dispatch, triggering actions/AJAX calls, etc. Everything on the right side of the line is naive and just handles rendering, providing calls back to the left side of the line (container components), etc. You can think of the container components as the first line of defense. As long as the state for each container component isn’t being updated, redux will never rerender that component or any of it’s children. That’s why grunalarity is so important. The more parts of the state tree a cotainer component maps to props, the greater chance it has at being rerendered and being forced to properly defend against doing so. That’s why doing:

is totally shooting yourself in the foot. Anytime any part of the state tree changes, TodoApp is gonna get rerendered. In that case, YES!!! you’d definitely have to put shouldComponentUpdate behind the container component and play defense yourself. Because now any part of the state tree could have told the N number of child components under TodoApp that it’s time for them to potentially redraw themselves, when in reality only one out of the N components needs to actually update.

Let’s take a look at a contrived example of an app that has 3 sections that’ll be drawn to the screen; each tied to a portion of our state tree. Say we’re building nfl.com, and our first page is for the Atlanta Falcons. We need to show the players, coaches, and cheerleaders. Our API payload would likely return each part of the payload at the same level, but even if we were dealing with a relationship that entailed nesting, it’d still be best to split it out upon receipt for the purposes of managing it in the UI. Since we have 3 pieces of the state tree that we care about, we could wire up 3 separate container components via connect. That way we can react to changes in the state tree in the most optimal manner. If the players change, there’s no need for the cheerleaders and players to be rerendered. In addition, if the cheerleaders never change, and are fully static after we initially render them, we could bypass subscribing to the store when connecting/constructing the container component. That way, changes to the store are completely ignored by the cheerleader component and ne never even have to entertain shouldComponentUpdate, etc. This all of course assuming that our top level component that wraps the cheerleader, player, and coaches components is indeed not connected to the store. It’d just render our container components and sail off into the sunset. We can pull this off since redux makes the store available to all components under the top level <Provider store={store}> component. So connect calls can happen at arbitrary depths within the component hiearchy. Lets try to visualize what redux is doing for us and how it does its best to idiot (we’re way smart...no worries) proof us: 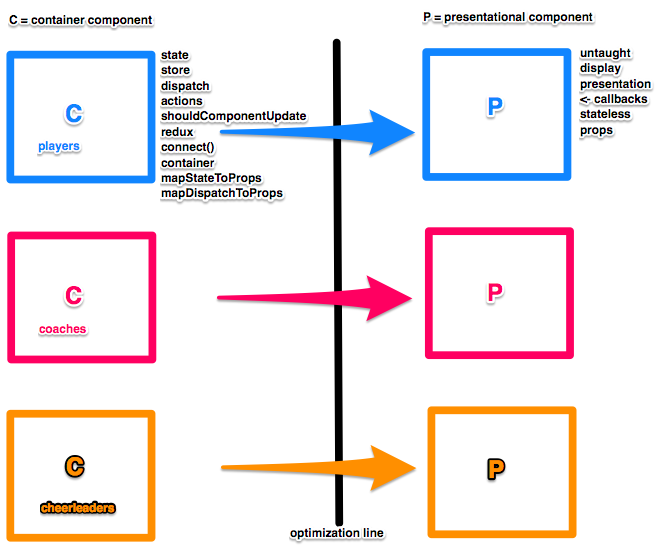 We see a container component and presentational component depicted above. A 1:1 mapping between our state tree and the portion of the app responsible for consuming that state. As mentioned, redux works hard to optimize all things in container land, while protecting everything behind it from superfluousrendering. It’s sane, efficient, and easy to reason about. Not much magic going on here.

We've seen the benefits of how rigourously applying connect can lead to a natural boost from the redux core. Very rarely, if ever, should you need to manually wire up shouldComponentUpdate in the context of redux. And that is all .

"Get behind the optimization line" - Antwan Wimberly