Find out who Congress follows on Twitter using the command line

This is a short tutorial on how to use command-line tools, including csvfix and t, the command-line Twitter interface, to access and parse data from the Sunlight Foundation and Twitter. The end goal of this exercise is to gather who everyone in Congress follows (friends, in the parlance of Twitter), and then count up the common friends to find out which Twitter accounts are most followed by members of Congress.

Here's a screenshot of the result, after it's been imported into Google Spreadsheets. Note that it's sorted by total number of followers, not necessarily the most followed by Congress: 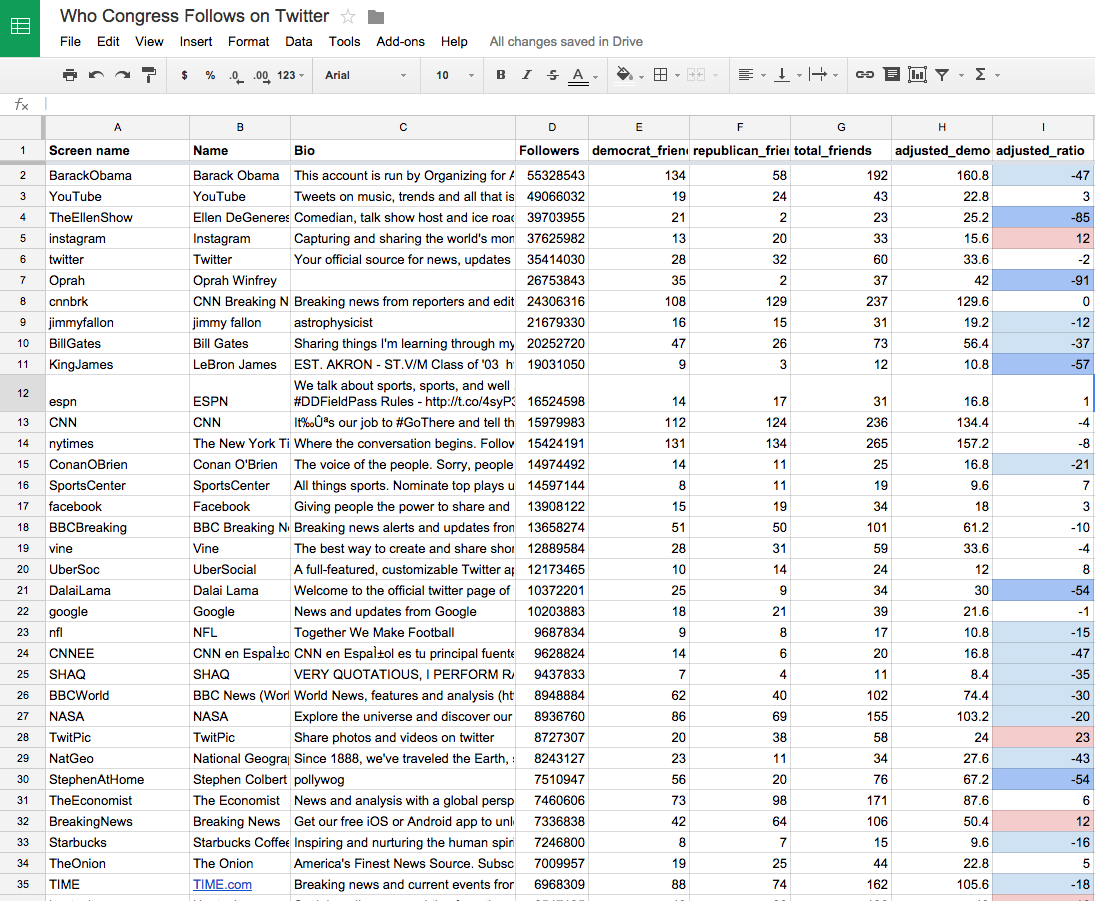 If you don't care about the code, you can visit the Google Spreadsheet here, which contains an excerpt of the data (top 600 accounts by total follower count).

The code in this tutorial is meant to be brief and expects that you have some familiarity with the basic Unix tools (such as grep and sort), as well as the concept of pipes and processes.

Getting legislator data from the Sunlight Foundationz

The Sunlight Foundation has a convenient spreadsheet of legislators, their party affiliation, and social media handles.

The sheet contains past legislators, so filter it by the "in_office" column, which is at position 10, and save it to a new file named current-legislators.csv

At this point, you'll have to use a more low-level API to do the batch lookup of friend ids as t followings will exceed the rate limit for a few of the legislators, such as @DarrellIssa with 30,000+ followings/friends. I recommend the Ruby Twitter gem, or, if you want to stay at the command line, twurl.

For example, here's an example of twurl wrapped in a while loop. The Twitter API endpoint, friends/ids returns up to 5,000 Twitter account IDs at a time. For accounts with 5,000+ friends, the response includes a next_cursor value, which you assign to the cursor parameter in the API call.

When that next_cursor is 0, you've reached the end of the list of friend IDs. For accounts with lots of friends, you might want to add a sleep interval (the Twitter API lets you make 15 calls per 15-minute window).

In any case, you can download the friend IDs I've fetched for our current legislators in this zip file.

The rest of this script assumes you have a subfolder named friend_ids with text files named after the respective lowercased-Twitter handles, e.g.

An aside: some random statistics

To find the number of unique users followed by Congress:

Interested in finding out how many members of Congress follow you? If you've downloaded the zip of Congressmembers' friend_ids (and have access to the t and csvfix tools, of course):

Alternatively, use grep -l to find out who exactly follows you:

Not too many followers of @God (the Twitter account, I mean). More followers of @Stanford than @Harvard, though @TheOnion has more Congressional fans than those colleges combined.

What Twitter accounts are most popular among Republicans versus Democrats?

This next bit of code is exceptionally gross looking, but only because I wanted to throw everything into as few lines as possible. What it does is given the current-legislators.csv file, filters by party (R or D), then selects the Twitter username of the filtered legislators. This list of usernames is fed by process to grep -f, which uses those usernames to find all the friend_ids/*.txt files. Each of those text files contains a list of Twitter IDs (numbers, not readable usernames), and so sort | uniq -c | sort -rn is used to count up the most frequently occuring Twitter IDs for the given party of legislators. I save the results into two temp files, /tmp/democrat-friends.csv and /tmp/republican-friends.csv

Let's filter this list to accounts followed by at least 10 legislators:

Finally we take the IDs in this sheet and pass them to t users, which will do a batch lookup of these 4,400+ IDs. We then use the csvfix join command to combine the friends_by_party data with the Twitter profile data.

I've posted a truncated result on this Google Spreadsheet. The adjusted_democrat_friends and adjusted_ratio reflect that there are currently 300 Republicans to 236 Democrats:

Check out the Google Spreadsheet:

The top 25 Twitter accounts by ratio of Democrat to Republican followers: 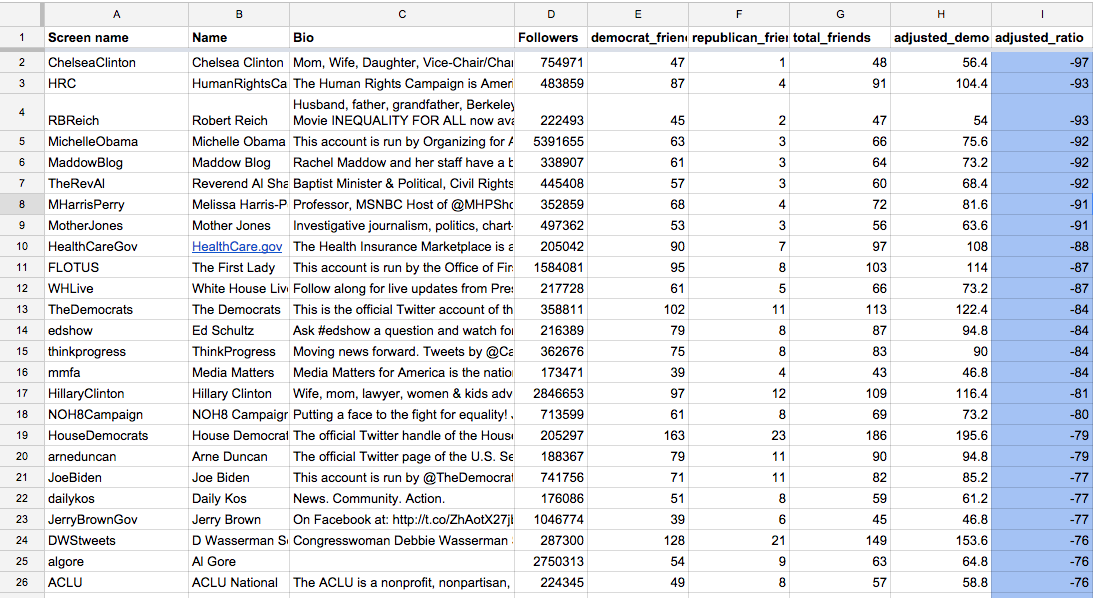 The top 25 Twitter accounts by ratio of Republican to Democrat followers: 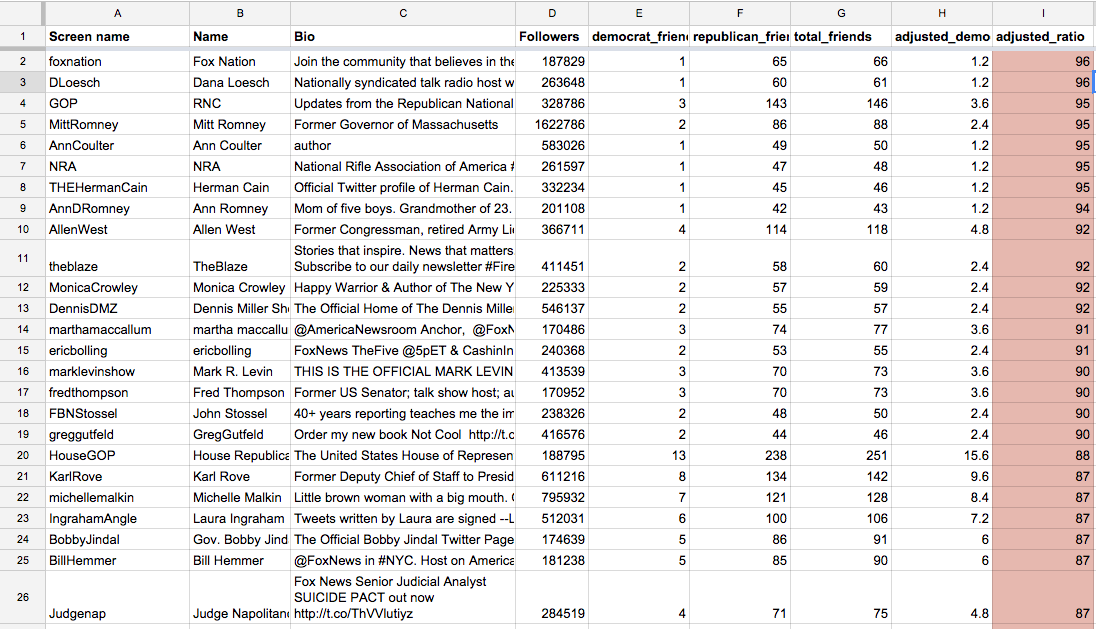 A quick lookup of which media outlets are followed by Congressmember twitter accounts.

If you don't feel like running all the code yourself to get the results, you can download my copy of friends_by_party_profiles.csv, which again, is limited to the 4,000+ Twitter users followed by at least 10 Congressmembers.

Note: because I didn't do a search for exact names, some terms (such as cbs) returned a lot of affiliated accounts. I trimmed the list down to 100 entities that were interesting to me, and of course, the csvfix/find search expressions were just news orgs off the top of my head, so this isn't an absolute top-of-all-media list (for example, @rollcallpols has 226 total followers, the same as @FoxNews, but I arbitrarily trimmed it since @rollcall is already one of the top items. And then I got bored and so the trimming isn't consistent).