A summary of the Rails Guides on Routes, plus other tips.

The Rails router recognizes URLs and dispatches them to a controller's action. It can also generate paths and URLs, avoiding the need to hardcode strings in your views.

Generating paths and URLs from code

Avoids hardcoding in the view. Reduces brittleness of your view.

Declares all common routes for the given resourceful controller. Instead of declaring separate routes for actions, declares all (index, show, new, edit, create, update, and destroy) in one LoC. 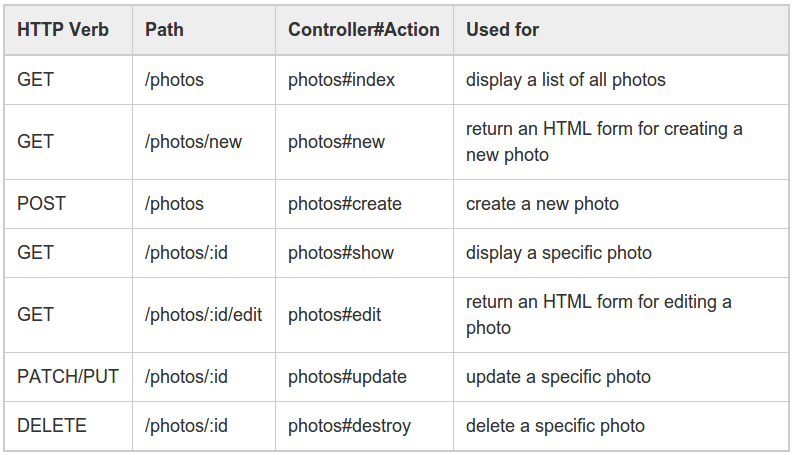 Run rake routes to see such a table. Notice that some of the paths are the same, which is possible because their HTTP verb is different.

Each of these helpers has a corresponding _url helper (e.g. photos_url). Which returns the same path prefixed with the current host, port, etc.

Singular resources lookup a resource without an ID. 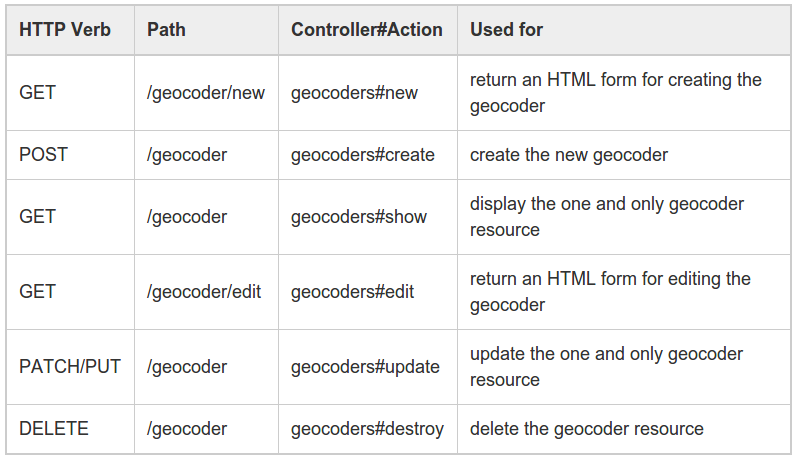 If using form_for on a singular resource, you need to specify the url (should be fixed in Rails 4.1+) 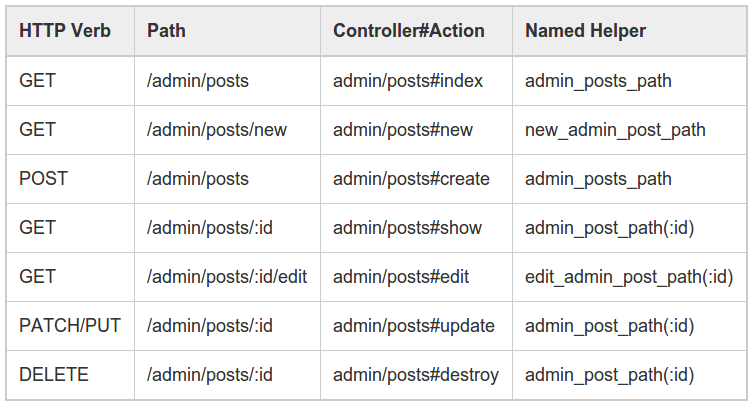 If you want to route /posts instead of admin/posts to Admin::PostsController, you could use:

Note that the paths would still look like admin/posts but the controllers and helpers will not contain admin (e.g. posts#index, posts_path).

This will also create all common routes for ads to an AdsController, with paths like /magazines/:magazine_id/ads.

Use nested routes to better express the relationship between ActiveRecord models. But don't nest too deeply, quickly becomes cumbersome. E.g.

Resources should never be nested more than 1 level deep.

You can avoid deep nesting by nesting the collection actions, but not the member actions. Also called shallow nesting. So you build routes with the minimal amount of information needed to uniquely identify the resource. E.g.

A balance between descriptive routes and deep nesting. There exists shorthand syntax to do the above:

The :shallow option can also be specified in the parent resource, so all nested resources will be shallow.

Concerns allows you to declare common routes that can be reused inside other resources and routes.

This is equivalent to

You're not limited to the 7 routes that RESTful routing creates by default.

This will recognize a GET request to /photos/1/preview, and route to the PhotosController#preview action, with the resource id value passed in params[:id]. It will also create the preview_photo_url and preview_photo_path helpers.

This will recognize a GET request to /photos/search, and route to the PhotosController#search action. It will also create the search_photos_url and search_photos_path route helpers.

Are you adding lots of extra actions to a resourceful route? Stop and ask yourself whether you're disguising the presence of another resource!