In this post, we'll cover how to use the SOS debugging tools to inspect variables from a process dump of a .NET Framework / .NET Core application.

In this first example, we'll use a running ASP.NET MVC 5 application hosted by IIS, but the steps here can be used on a normal .NET framework Windows application. Let's start by taking a full memory dump of a running application.

Now that we have a memory dump, it's time to look at the suspended state of the application. Copy the dump file to your workstation, and then open it via File > Open Crash Dump in WinDBG. Your screen should look like this: 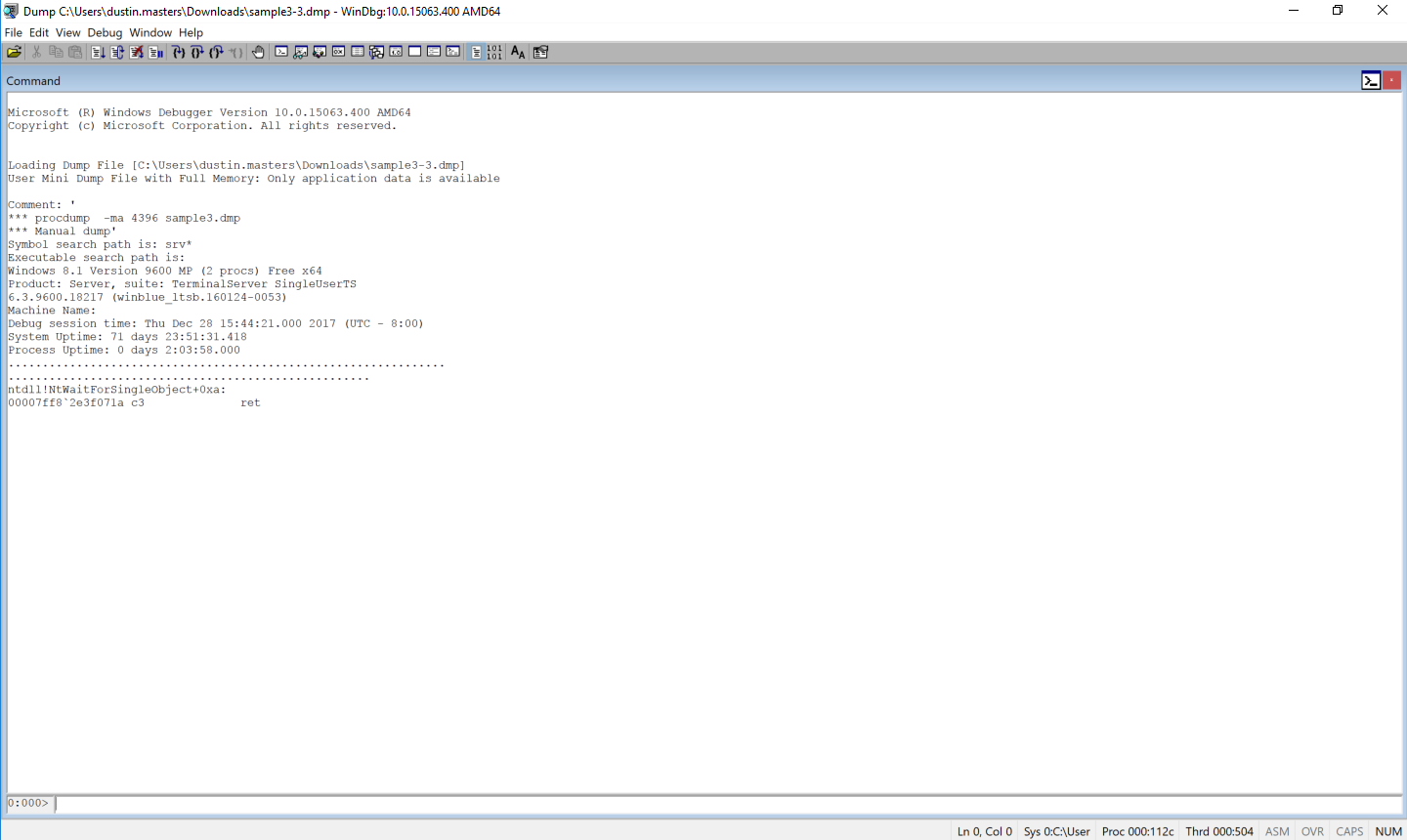 Load the SOS debugging extension, which will allow us to inspect the managed threads:

If get an exception when running this command and you are using IIS Express, try the command again. There appears to be a bug that throws an exception only for the first command run from WinDbg, which should not affect the rest of your debugging session.

You should see a lot of threads in the output. To narrow the results down, search for the namespace of your project in the output text. 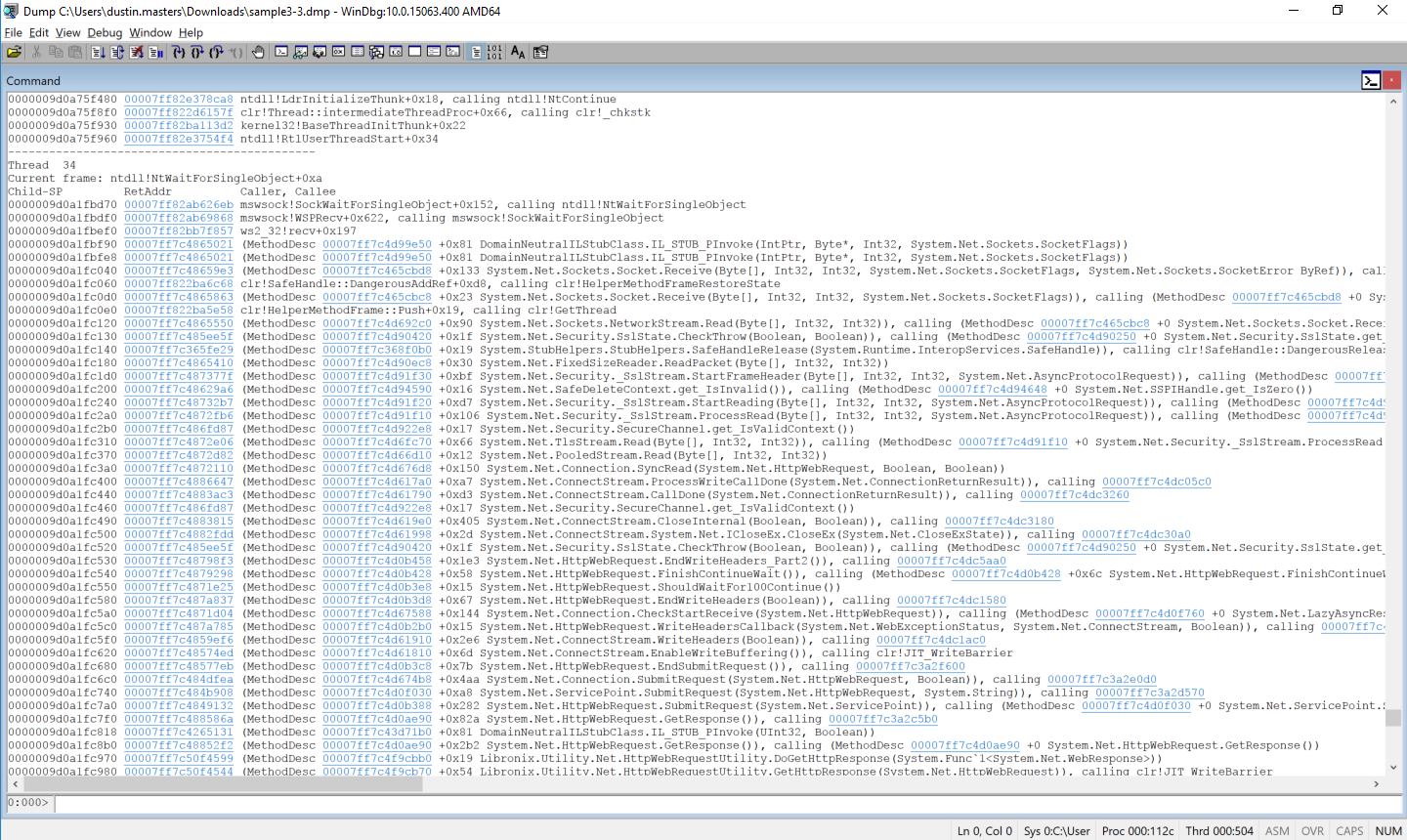 We can see that there is an external web request being made in Thread 34. Let's look at what external URL is being requested. Switch to the thread, and then run clrstack -p to get some more detailed information about each method call. 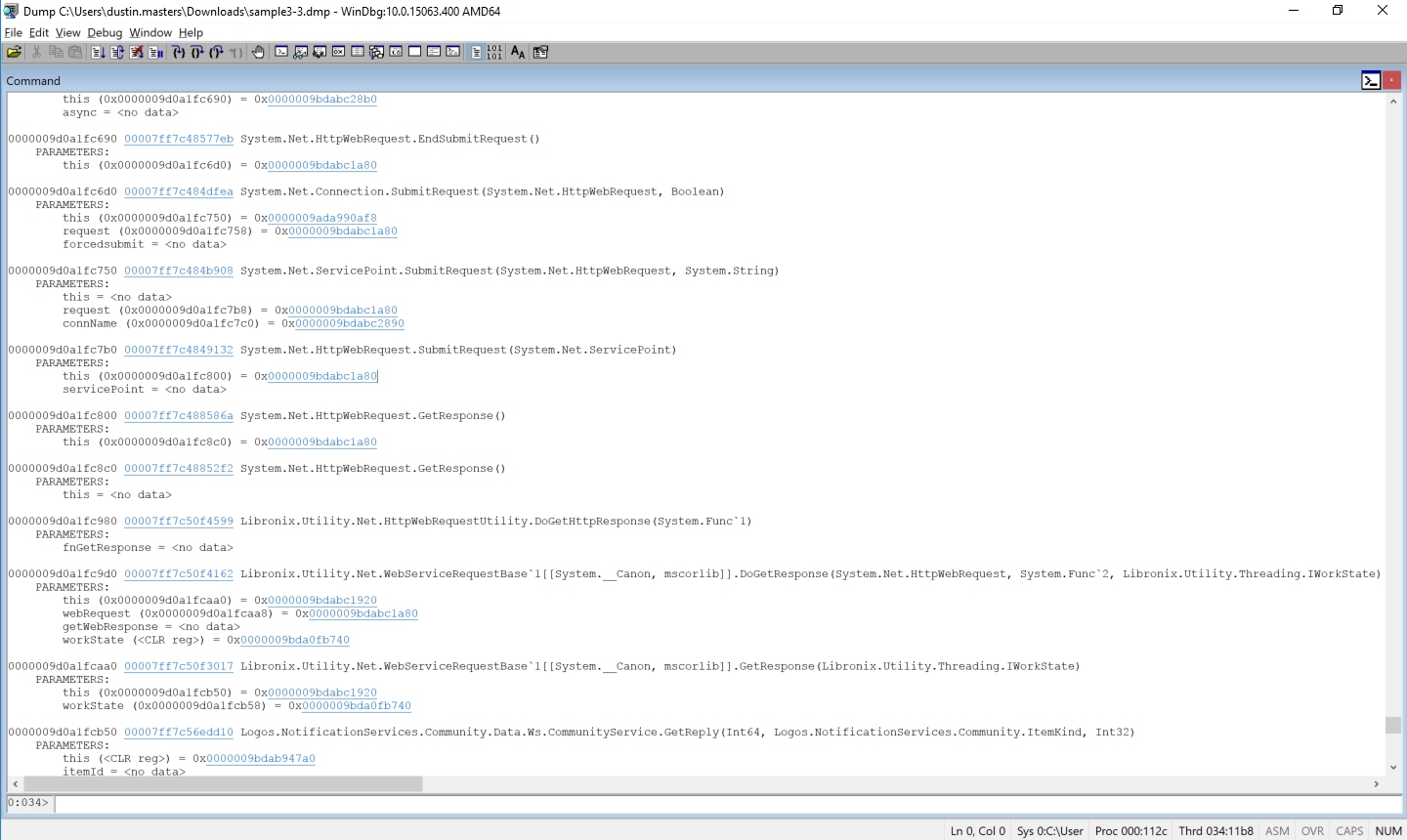 You may see many arguments that contain the value <no data>. This can be caused by compiler optimizations; inspecting the state of these parameters is beyond the scope of this article.

The controller is present in this call stack, so let's inspect the object instance by clicking on the this instance address, which is a shortcut for the !DumpObj command.

This instance contains a field named _request, which contained a field named requestUri, which has the original URI for this request:

In this next scenario, we'll look at inspecting a core dump from a .NET Core app running on an Ubuntu x64 instance. The instance will have a core dump taken while a request is processing, which we will then inspect.

Take a core dump of the process using the createdump utility. These commands assume you have the coreclr repo checked out to ~/git/coreclr, and that you're running an application built with .NET Core 2.0.

Load the dump in LLDB. This command also loads the SOS debugging extension.

After a few moments, a CLI will become available. Run eestack to dump the state of all CLR threads. If you get an empty output or a segmentation fault, verify that you are running the correct version of lldb and are loading libsosplugin from the bin directory, and that you have created the core dump with createdump.

Dumping that field reveals the query part of the URL the browser requested!

Thanks for reading. If debugging problems like this sounds interesting to you, join us!