My attempt at a hardware random number generator in Arduino with no external components.

Only produces ~64 bit/s because of the minimum length of the watchdog timer. :(

It uses the watchdog timer to sample (and reset) Timer 1. Since the watchdog timer runs on its own RC oscillator, and Timer 1 is on the crystal oscillator, there is random variation in the value read. Then the randomness is spread around to all 8 bits by reading 8 times and bit-shifting and XORing, to produce a random byte.

The assumption is that at least one bit in each sample is truly random. Though in reality, probably multiple bits have varying amounts of entropy? The raw read from the timer sampling is estimated at 4.4 bits of entropy per byte.

It seems to work. I think the main flaw would be if the two oscillators become correlated to each other in certain hardware configurations or at certain points in time, which I haven't noticed, despite running it continuously for days.

Disclaimer: I have no idea what I'm doing.

But it measures better than TrueRandom. "TrueRandom" is not truly random:

For comparison, with probably_random_with_TimerOne.ino, ent says:

Generating the 13 GB required by dieharder would take about 48 years. :D

Output as an image: 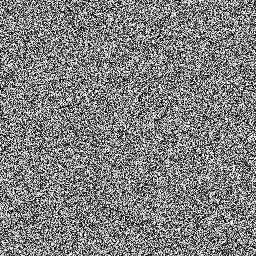 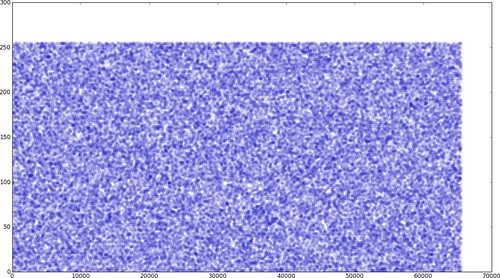 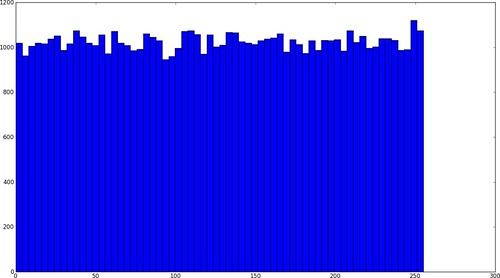 I've also tested without the TimerOne library (probably_random.ino), just sampling the Arduino's constantly-cycling PWM timers instead of configuring and resetting Timer 1, and it doesn't seem to hurt the randomness:

So you should be able to use all the inputs and outputs normally, and still generate random numbers. The LSBs will still be noisy even if the MSBs are periodic, and XORing the two will preserve only the randomness of the LSBs.

Obviously if your program turns off Timer 1 completely, this will no longer produce random numbers. (But it doesn't use any obfuscation or whitening other than the XOR shifting, so if you feed it nothing but 0s, it will output nothing but 0s and it will be obvious.)

Using Clear Timer on Compare mode should be ok, as long as the compare isn't correlated with the watchdog. If you use the watchdog timer to reset Timer 1 before reading it, for instance, you won't get random numbers. :)

Not sure about switching Timer 1 to other prescalers. Is it possible to run Timer 1 so slowly that it doesn't change between samples? That would be bad.