Currently the peer to peer network relays block solutions in an inefficient way. Each block contains the 80-byte proof-of-work header along a list of serialized transactions. As most of the transactions were previously relayed and present in the mempool, it is possible to reference them and reduce the bandwidth usage.

Another issue is the long time it takes for a 1mb block to fully propagate the network. This increases the probability of pruned blocks that negatively affects the security of the system.

All serialized values use the Bitcoin's little endian wire format and use native types or scripts where present.

Additionally to the header we add a list of transactions or ids that describe the merkle tree and optional metadata that the miner can add.

The soft block id is the SHA256(Bitcoin header | metadata if present). When metadata is present, the id hash must be signed with the miner committed key.

Transaction reference is a list where each entry can be a raw transaction, transaction id, selection, or a difference.

All transaction ids are truncated to 32bit. In case of id collisions, each conflicting id must be expressed in 64, 128, or 256bits by setting the appropriate flag.

One or more serialized transactions. This is useful when a miner wants to include a transaction that they didn't broadcast like the coinbase transaction.

A list of transaction ids. This is the usual reference to a new transaction that appeared in the mempool.

or if higher precision is needed

Returns a list of transactions that were included in a previous soft block based on the indexes start to end.

If a node fails to recreate the new transaction list or does not support a particular algorithm, can request the block originator another encoding e.g. 0x01 transaction id list.

The coinbase transaction must be always present in raw format or in diff. After the coinbase, the rest of the transactions are listed in the order they appear in the merkle tree. The calculated merkle root must match the value in the Bitcoin header.

Metadata is an optional data list that the miner attaches. It must be signed with the miner key that is committed in the coinbase transaction.

The miner creates a private key and calculates the hash160 of the public key (default is EC Secp256k1). This hash is committed to the coinbase transaction.

If there are more than one scriptPubKey matching the pattern, the one with highest output index is assumed to be the public key commitment.

To discover soft block compatible nodes a service bit must be registered. The p2p network shall use the same bitcoin data structures but it would be capable to work over UDP.

TODO: define a BIP36 compatible service and UDP network. Some additional commands we need are:

Constructing a blockdag with soft blocks

Each soft block can have multiple parents that doesn't contain conflicting transactions and it must not be in conflict with it's parents. A parent cannot be a simultaneously an ancestor of another parent at the same time i.e. when graphing the DAG, there are no triangles. 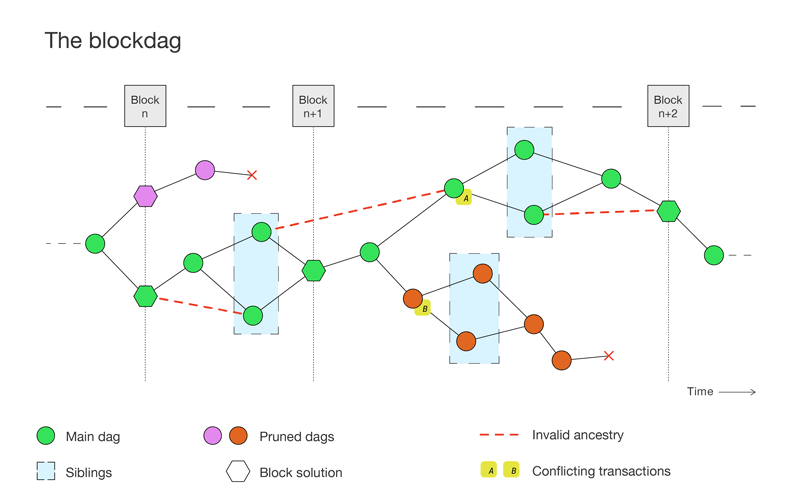 The soft block must contain transaction references that validates the merkle tree root of the header. In case a transaction is not present, the block is not valid until the missing pieces are fetched from the block originator peer.

In case of a blockdag fork, we calculate the amount of work for each tip to determine the miner consensus.

A soft block shall be transmitted before any other data and first to peers that have the smallest RTT (discovered with ping/pong messages).