The end of 7 long months

It looks like that no matter what the response rate fluctuates around 50%. Over time my skills got better, as for everyone else, so I don't think there's a lot to be understood from that data, in the sense that we're deling with different companies with different interview processes. I posted it because I felt this time it took a lot to get the job I wanted.

About the interview processes

I've written about that.

But I'd like to spend some time talking about the last one I was involved with:

I think this is a long process but at no point was it too hard or stressing, and it did the job of making sure I had enough CS, coding, and interpersonal skills. I said enough, not good :b

Since I had lots of emotions about the current state of how interview processes are handled in the industry, I did the usual "hitler reacts" video, about interviews, showing few problems and a lot of saltiness: 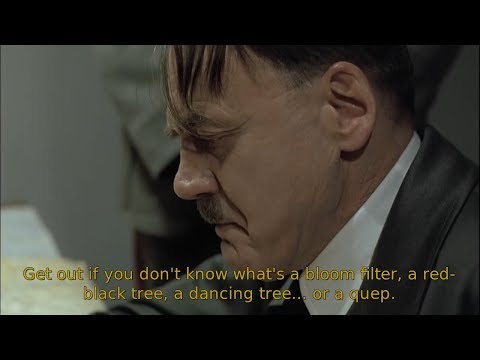 Not knowing all the technologies

In the past I've been rejected for (for example):

So, my point is that I (might) understand if you want experienced people if you're using languages like Haskell, Idris, OCaml, Clojure, etc... but I don't really see the point in asking for previous experience in PHP. I am not saying PHP developers are second class developers, far from it, I am talking about the steep learning curve of some languages when compared with others.

My idea is that if you're looking for a 100% match you're just going to get whatever you signed for, nothing more nothing less, you don't get the benefits of a newbie, looking at your design choices with a questioning eye.
A developer with experience will recognise patterns and idiomatic code that's usually written in that language, so they will just go "yeah, that's how you do that" and move on, without necessarily pondering on the choice.

I believe a company should look for a partial overlap in a potential candidate, seeking skills they don't currently have in the team, because diversity brings innovation. Imagine the newbie learning your stack and understanding that actually there's a better way of composing modules, and you didn't know about that because no one in the team went through the basics all over again. Hiring newbies is fool profing your codebase to a certain extent. Of course they should have their own area of expertise, in the end there's some value they're bringing to the table, right?

In the company where I'm going to be working at they use C++ and are building a security oriented product.
Needless to say I don't know both, and I don't know them big time. There's the chance to learn on the job, and bring the refreshening presence of a newbie in an environment of people used to the tech stack.
I believe the thing to do now is plan to fill the gap, because one thing is to bring a pair of fresh eyes to see everything with a critic mindset, the other is to arrive completely unprepared with no plan to step up one's knowledge.