There are a few different sources online that describe the ways that you can program Arduino Uno/ATmega328P in assembly, and in the last couple of days I've had to switch through most of them just to get the basic setup and initial programs working. This is an attempt to aggregate all those sources in a centralized document, with two simple example programs.

There are two major options for the task (of which I'm aware of), and the setup I've settled on is accidental in retrospect1. But you might research on your own the alternative setup based around the AVR Libc project.

For the setup I use you need: avrdude and avra. Do note that I'm using a Linux box, and in case you're on another operating system you'll be on your own with the setup/configuration of these tools.

Optional (but must read)

When connected via USB my Uno would have it's serial interface mapped to /dev/ttyACM0. Because I wanted a more intuitive device name (and the fact that it took me some time to find out what device name it had in the first name), I wrote an udev rule to map my Uno board to /dev/arduino-uno.

If you do the symlink, be sure to also include the OWNER directive; otherwise every time you upload the new program to your Uno you will have to call avrdude with sudo.

NOTE If you skipped this step, be sure to replace any occurence of /dev/arduino-uno with /dev/ttyACM0, and prefix all avrdude calls with sudo in the followup Makefile.

Also you'll see a reference to picocom (program used for serial communication with the board) in the Makefile I use, and it should work but I haven't tested it yet.

NOTE There is already a popular Makefile project for Arduino, however that one relies on the AVR Libc project. And as with other "prepackaged" solutions, like oh-my-zsh, I prefer to start from a small base. I find it easier to understand and maintain.

The makefile is available towards the end of the page.

Given a program named blink.asm

Where do the names come from?

When reading other example assembly code online you will find references to named constants that are not built into the assembler. Those usually come from m328Pdef.inc. From where you download that file doesn't really matter, since basically everyone is carrying a copy around with them; or so it seems.2

I personally use it as a learning reference, and I would recommend you copy only the definitions you need in your program until you get familiar with the names. That's the way I approach it, as you'll see in my example programs.

The project for the sample code 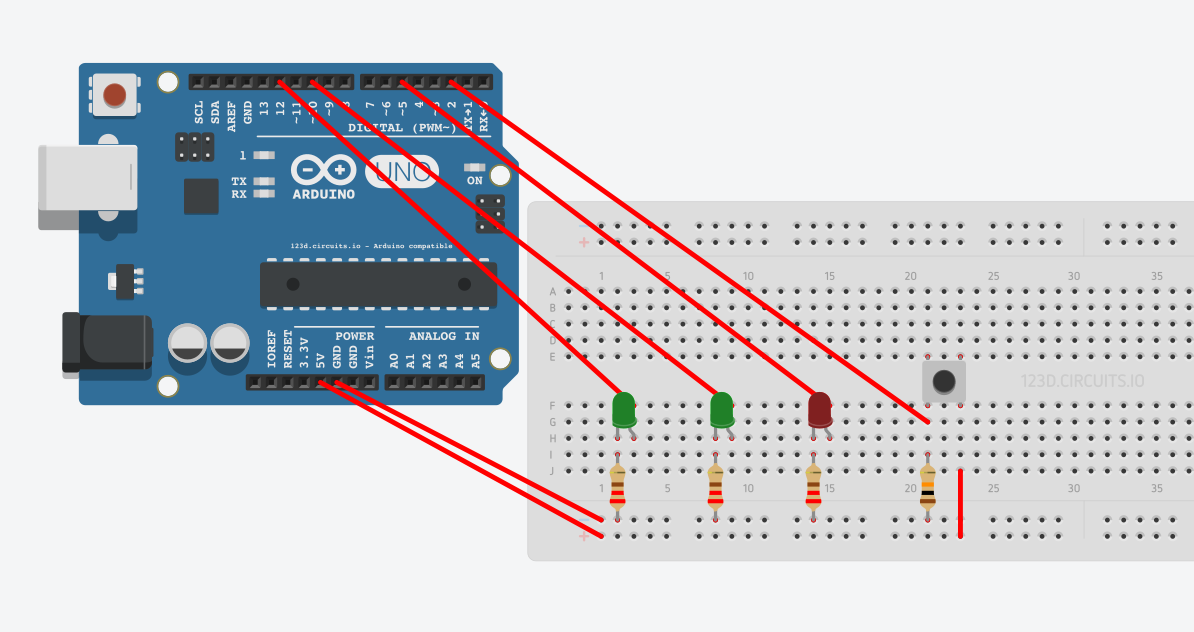 Three LEDs and a simple switch. With each press on the switch the LEDs turn on (from left to right), one by one, and once the red LED is reached further presses will turn off the LEDs in reverse order until we reach the initial state. Rinse and repeat.

Two implementations will be shown, the first one is the way most people - I think - would write the implementation (in terms on reacting to button presses, not necessary how they'd toggle the LEDs) (assuming they don't know about interrupts yet), and the second version will use an interrupt instead of "polling" the pin for voltage (state) changes.

NOTE the assembler manual is for AVRASM32.exe, not avra. However avra is a compatible assembler, with just a few extra features

NOTE if you see online references to avrasm2, you have to know that piece of software is different from AVRASM32.exe and avra. And avra is highly unlikely to be able to compile code written for that assembler.

You need to keep these references close by when programming AVR in assembly:

While mentioned in the previous document that you should download the assembly instruction set manual, for the following examples I'd like to detail the instructions I will use (so that you can follow along the code examples).

You are encouraged to implement the simple Arduino project presented, download the files (there's a download button at the top) and build the project. If you're unfamiliar with the resistor values from the attached image, here's the handy cheat sheet I'm using. 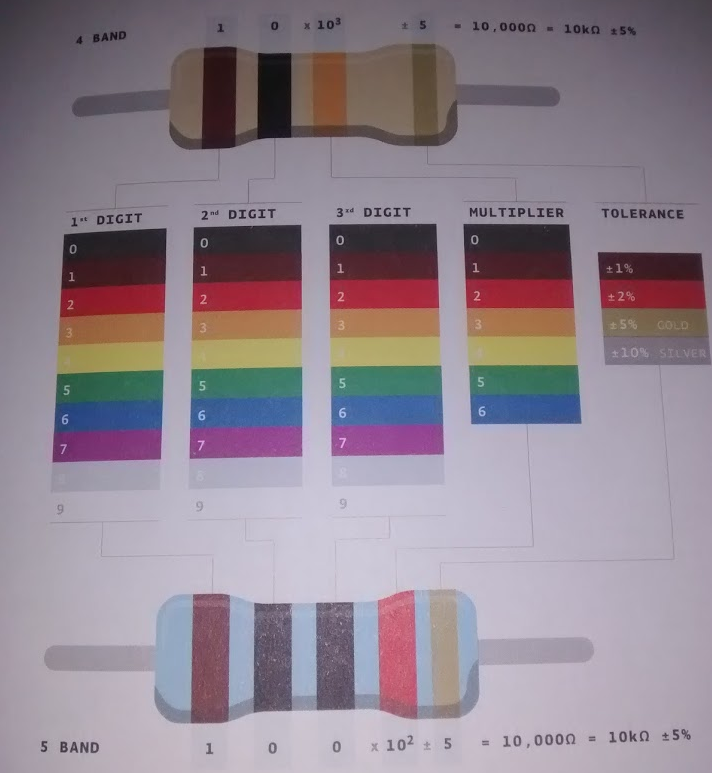 Taken from the "Arduino Projects Book", licensed under CreativeCommons BY-NC-SA 3.0

Except where otherwise noted, this work is licensed under a Creative Commons Attribution 4.0 International License.