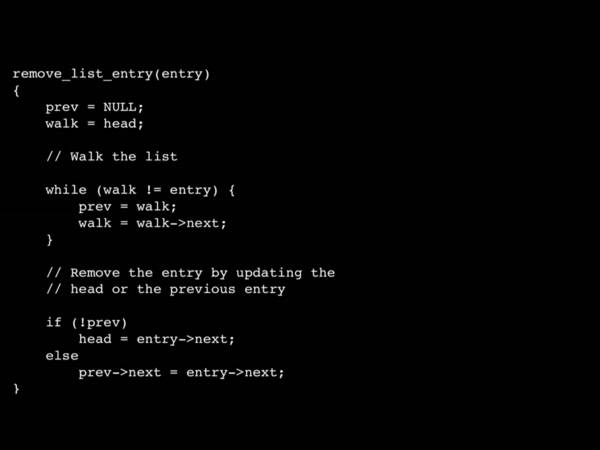 The following is better. More elegant. It doesn't matter which element we are trying to remove, we always take the same action and it works for both cases. 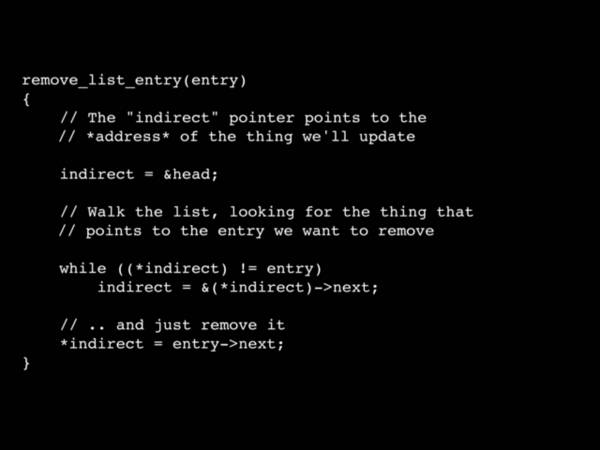 Some things to keep in mind:

I'll use C because we don't need any C++ features to illustrate this point.

Now the fun part: The implementation of the good taste example keeping the same outline from Torvalds's slide. I'll skip the less elegant version because you can easily implement that once you know the better one. As a reminder, the member access through pointer (->) operator has precedence over both the dereference (*) and address-of (&) operators. Also, the * and & operators have right-to-left associativity.

As part of the main() function

If we want to create a separate function to do the deletion, we'll need to change the pointer itself, not a copy of it. In C++ you can just declare the pointer parameter as a reference argument (&) and the compiler will take care of the details. In C we need to handle it ourselves so we add one more level of indirection for any parameters that need to be updated including pointers.

As a separate function

Now let's look at the add_entry function we used. As it turns out, this one is also a good example of something we can do in a pretty straightforward way but also in a very elegant, better way.

When adding an entry, we need to know if we're working with an empty list and therefore need to change the head pointer or if the list already contains elements, in which case we don't change the head but add the new node after the last one.

The following is a way to do it without having to worry about whether the list already has elements. It's more elegant. Let's start with the case where we're doing it from within our main() function.

Within the main() function

And now let's see how we would do the same but in a separate function. This adds another level of indirection just as it did for the delete function.

As a separate function

One final note: There's nothing wrong with the less elegant versions. They work just as well and are easy to implement. Coming up with clean, elegant solutions to problems is harder and you need to evaluate the costs and benefits of each approach including both efficiency and maintainability.

Below you'll find the file taste.c with full working examples of these concepts.