In JavaScript, objects have a special hidden property [[Prototype]] (as named in the specification), that is either null or references another object. That object is called “a prototype”: The property [[Prototype]] is internal and hidden, but there are many ways to set it.

One of them is to use the special name __proto__, like this:

When we read a property from object, and it’s missing, JavaScript automatically takes it from the prototype. In programming, this is called prototypal inheritance.

The prototype chain can be longer as well 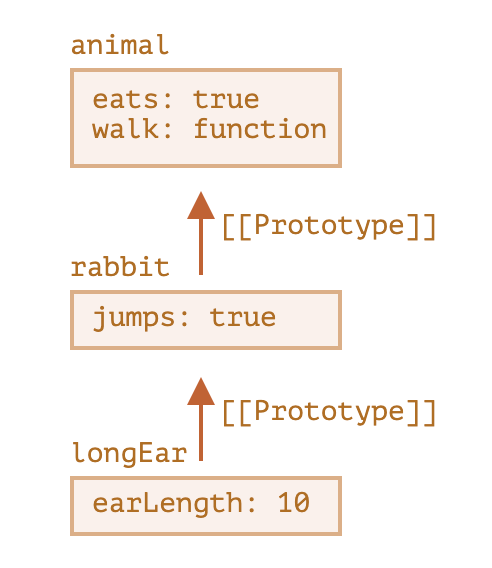 Also it may be obvious, but still: there can be only one [[Prototype]]. An object may not inherit from two others.

The prototype is only used for reading properties.

The value of “this”

this is not affected by prototypes at all.

No matter where the method is found: in an object or its prototype. In a method call, this is always the object before the dot.

That is actually a super-important thing, because we may have a big object with many methods, and have objects that inherit from it. And when the inheriting objects run the inherited methods, they will modify only their own states, not the state of the big object.

The for..in loop iterates over inherited properties too.

If you don't want to access inherited properties use obj.hasOwnProperty(key). It returns true if obj has its own (not inherited) property named key. 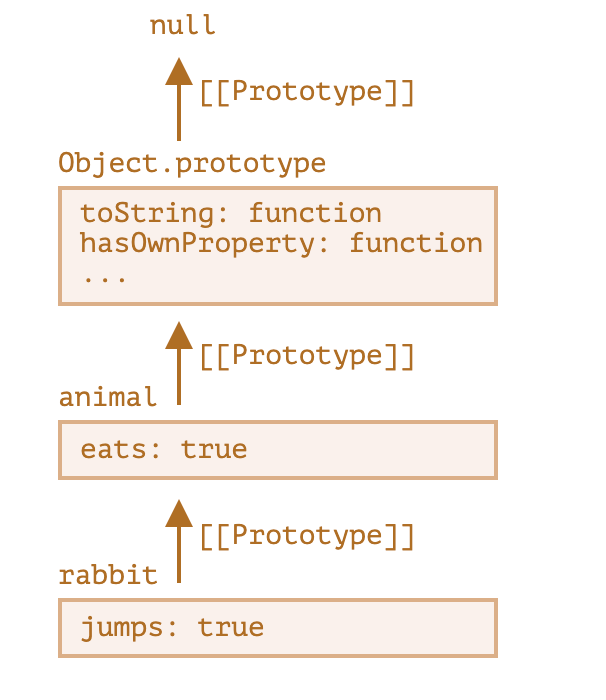 Setting Rabbit.prototype = animal literally states the following: "When a new Rabbit is created, assign its [[Prototype]] to animal".

F.prototype property is only used when new F is called, it assigns [[Prototype]] of the new object.

If, after the creation, F.prototype property changes (F.prototype = "another object"), then new objects created by new F will have another object as [[Prototype]], but already existing objects keep the old one.

Every function has the "prototype" property even if we don’t supply it.

The default "prototype" is an object with the only property constructor that points back to the function itself.

Where’s the code that generates the string "[object Object]"? That’s a built-in toString method, but where is it? The obj is empty!

…But the short notation obj = {} is the same as obj = new Object(), where Object is a built-in object constructor function, with its own prototype referencing a huge object with toString and other methods.

Get last elements with “at”

Methods that work with the end of the array

Methods that work with the beginning of the array

We already know methods that add and remove items from the beginning or the end:

The arr.forEach method allows to run a function for every element of the array.

The arr.findIndex method is essentially the same, but it returns the index where the element was found instead of the element itself and -1 is returned when nothing is found.

Map is a collection of keyed data items, just like an Object. But the main difference is that Map allows keys of any type.

This also works, map without entries

A Set is a special type collection – “set of values” (without keys), where each value may occur only once.

For multiple calls of process(obj) with the same object, it only calculates the result the first time, and then just takes it from cache. The downside is that we need to clean cache when the object is not needed any more.
Replace Map with WeakMap in the code above.

Destructuring assignment is a special syntax that allows us to “unpack” arrays or objects into a bunch of variables, as sometimes that’s more convenient.
Destructuring also works great with complex functions that have a lot of parameters, default values, and so on. Soon we’ll see that.

Works with any iterable on the right-side

Arrow functions have no “this”

There’s a subtle difference between an arrow function => and a regular function called with .bind(this):

Arrows have no “arguments”

Encapsulates the IO operation and allows to obtain the result later.

If the function is called often, we may want to cache (remember) the results to avoid spending extra-time on recalculations.

In the code above cachingDecorator is a decorator: a special function that takes another function and alters its behavior.

Using “func.call” for the context

The caching decorator mentioned above is not suited to work with object methods.

But there is a pitfall here. user can modify before the setTimeout triggers.

The result of func.bind(context) is a special function-like “exotic object”, that is callable as function and transparently passes the call to func setting this=context.

We can bind not only this, but also arguments. That’s rarely done, but sometimes can be handy.

Here the mul function is created with another context

Attaching events to a DOM element

There are 3 ways in which event(s) can be attached to a DOM element.

Not a good idea to mix up JS and HTML

In web page there is a main thread. Rendering, JS engine and other things are handled by main thread which gives a deterministic order.

The execution context and stack

When a function makes a nested call, the following happens:

In old times, rest parameters did not exist in the language, and using arguments was the only way to get all arguments of the function. And it still works, we can find it in the old code.

But the downside is that although arguments is both array-like and iterable, it’s not an array. It does not support array methods, so we can’t call arguments.map(...) for example.

If we access the arguments object from an arrow function, it takes them from the outer “normal” function.

There’s a subtle difference between Array.from(obj) and [...obj]:

A function is called “nested” when it is created inside another function.

In JavaScript, every running

Rectangles on the right-hand side demonstrate how the global Lexical Environment changes during the execution:

A function is also a value, like a variable.

Naturally, this behavior only applies to Function Declarations, not Function Expressions where we assign a function to a variable, such as

When the code wants to access a variable – the inner Lexical Environment is searched first, then the outer one, then the more outer one and so on until the global one.

In this example the search proceeds as follows:

What’s different is that, during the execution of makeCounter(), a tiny nested function is created of only one line: return count++. We don’t run it yet, only create.

When on an interview, a frontend developer gets a question about “what’s a closure?”, a valid answer would be a definition of the closure and an explanation that all functions in JavaScript are closures, and maybe a few more words about technical details: the [[Environment]] property and how Lexical Environments work.

So, counter.[[Environment]] has the reference to {count: 0} Lexical Environment. That’s how the function remembers where it was created, no matter where it’s called. The [[Environment]] reference is set once and forever at function creation time.

“var” has no block scope

let will throw an error

“var” variables can be declared below their use (HOISTING)

Declarations are hoisted, but assignments are not.

In the past, as there was only var, and it has no block-level visibility, programmers invented a way to emulate it. What they did was called “immediately-invoked function expressions” (abbreviated as IIFE).

So, the parentheses around the function is a trick to show JavaScript that the function is created in the context of another expression, and hence it’s a Function Expression: it needs no name and can be called immediately.

As we already know, a function in JavaScript is a value.

Every value in JavaScript has a type. What type is a function?

In JavaScript, functions are objects.

Use of referencing the function itself

All the property flags are true by default

If the property exists, defineProperty updates the flag, otherwise it creates the property with given flags and if flag is not provided, its assumed false.

For instance, Math.PI is non-writable, non-enumerable and non-configurable:

Normally when we clone an object, we use an assignment to copy properties, like this:

…But that does not copy flags. So if we want a “better” clone then Object.defineProperties is preferred.

If we have an obj with property firstName and lastName, we can create a getter for fullName.

Assigning value to a getter will throw an error

Instead create a setter for such property

Descriptors for accessor (get and set) properties are different from those for data properties.

For accessor properties, there is no value or writable, but instead there are get and set functions.

That is, an accessor descriptor may have:

Object are just a place holder in memory, represented in the form of key:value pair.

Iterating across all the properties

Variable store a reference to the object not the actual object. Primitives store actual values.

Copying the object copies the reference of the object.

“this” is not bound

When a function is executed with new, it does the following steps:

By specification, only two primitive types may serve as object property keys:

A “symbol” represents a unique identifier.

Symbols are guaranteed to be unique. Even if we create many symbols with the same description, they are different values. The description is just a label that doesn’t affect anything.

Symbols allow us to create “hidden” properties of an object, that no other part of code can accidentally access or overwrite.

May use primitive conversion

The method num.toString(base) returns a string representation of num in the numeral system with the given base.

Another funny consequence of the internal representation of numbers is the existence of two zeroes: 0 and -0.

That’s because a sign is represented by a single bit, so it can be set or not set for any number including a zero.

Strings can’t be changed in JavaScript. It is impossible to change a character.

The usual workaround is to create a whole new string and assign it to str instead of the old one.

Searching for a substring

It looks for the substr in str, starting from the given position pos, and returns the position where the match was found or -1 if nothing can be found. Returns position if found else -1.

str.lastIndexOf(substr, position) that searches from the end of a string to its beginning.

str.includes(substr, pos) returns true/false depending on whether str contains substr within.

substring of a string

Returns the part of the string from start to (but not including) end.

Syntax:
let timerId = setInterval(func|code, [delay], [arg1], [arg2], ...)
All arguments have the same meaning as setTimeout. But unlike setTimeout it runs the function not only once, but regularly after the given interval of time.

Advantage of using this approach Nested setTimeout allows to set the delay between the executions more precisely than setInterval.

If requests are failing then the interval time can be increased

Advantage of using setTimeout instead of setInterval for recurring tasks

The real delay between func calls for setInterval is less than in the code!

There’s a special use case: setTimeout(func, 0), or just setTimeout(func).
This schedules the execution of func as soon as possible. But the scheduler will invoke it only after the currently executing script is complete.
So the function is scheduled to run “right after” the current script.

For instance, this outputs “Hello”, then immediately “World”: 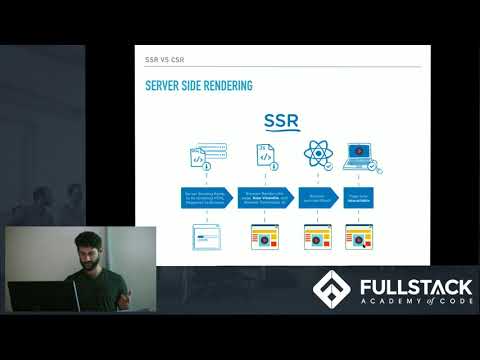