Better to answer them here where there's more room to type!

Why do you do this?

I like to play the game efficiently (mostly shiny hunting, retired from battle mechanics). If I find information that could guide how others play, I'll share it.

My goal is to make relevant information about how the Pokémon games work public as long as it isn't harmful for it to be public. I try to make my information as complete as I can before releasing it, but even if it's not complete, simply making it public allows everyone else to work on it to fill in the gaps.

I try my best to avoid story spoilers, but if certain mechanics are available at a certain stage of the game, it can be unavoidable.

I compiled an index of all the notable science I've shared on Twitter for the Pokémon games.

No, I am scared. In all seriousness, I usually keep my DMs closed because I got too many disturbing or harassing messages. Unless it's very private, very personal, or potentially harmful to others, most questions can be asked publicly. I prefer to keep questions public because others may know the answer, and keeping the answer in public allows others to learn and reference. Please do not seek me out on other platforms to contact me in private.

If my DMs are open, I will not answer them if the question can be asked publicly for others to learn from.

If you need to discuss privately for any other reason, e.g. asking me to look at an early draft for something, let me know and I'll open a DM.

Can you help me with something in an older game?

Maybe. I don't have any experiencing researching Pokémon games that aren't on Switch, or side games like Unite, Quest, and Cafe. But you can always ask in case someone knows the answer to your question.

I think that something you wrote is incorrect.

I'm always happy to make corrections, if you provide the evidence that shows otherwise. When I say "evidence," I mean examples with evidence (visual or data) that disproves the claim or statistical analysis of a data set from a controlled experiment. I can't really respond if your reason is "It doesn't feel right to me" or your study is underpowered.

Will you research [x] for me?

Probably not, unless I also want to know the information. Many requests I get already have an answer, or the answer isn't well-explained; all it takes is someone else to point to where the answer is or to explain it better.

I have a feeling that [x] is affecting the shiny rates! Do you know about it?

Everything I know about shiny rates is posted as soon as I assemble it. Unfortunately, people still believe they have stumbled upon something new and tag me for months with superstitions that something unmentioned affects the shiny rates.

Since it takes a lot of time to investigate and disprove every superstition, I will only research theories about shiny rates if you provide excellent mathematical evidence (here's a guide) that there is something going on.

Here's an example where someone conducted an experiment about LGPE shiny rates because they felt something was off about the known rates -- and they turned out to be right in the end.

Why did you not reply to my question on Twitter?

What can I do to figure out [x] in-game if I can't find a dataminer to help?

Most questions don't require a dataminer to answer them! Here's how you can contribute:

Why can't you read the answer to my question in the source code?

Well, I don't have the source code. Source code is what Game Freak writes in their offices, and it'd be illegal for me to have it. I only have reverse-engineered game binaries, which I got from the games I purchased. And the disassembly/pseudocode is not always that clear. 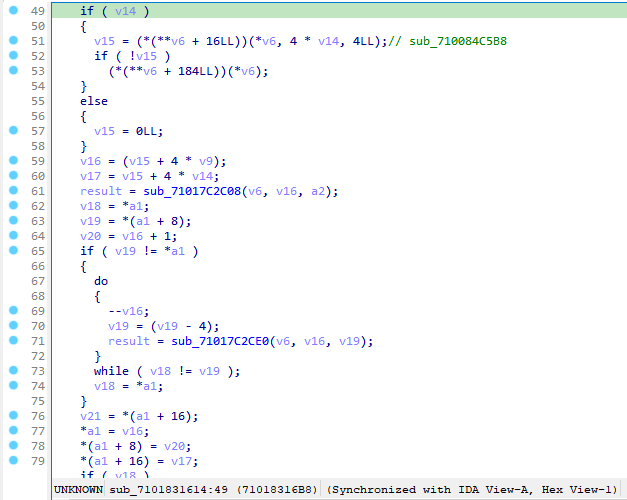 Imagine this but everything is this. We usually don't get symbols so it's a bigger question of "Where do I even look for the answer?"

You have a cake made with your grandmother's secret recipe, and you want me to figure out the secret recipe. I can either inspect it (look at it, taste it, cut it), or I can send it to a lab and have them send me a complete list of every single element in it. In this case, the secret recipe would be the game's source code.

Now, if you wanted me to figure out something like "Is the cake chocolate?" this would be a question that's easier to figure out by simply looking at the cake. It would be way harder for me to figure it out by looking at the list of elements. This is why I encourage anyone who's curious and owns the game to try figuring out the answer themselves. Reverse-engineering isn't always the most effective way!

Usually questions involving numbers are better solved through datamining, e.g. "How much egg is in the cake?" or "What's the chance of a shiny Pokémon appearing?"

This is also why dataminers can miss certain conditions. We only get an idea of what's happening, and even if we see it in the disassembly, it doesn't mean it's used the way we think it is. If we're using the cake example, this might be concluding "There are 3 eggs in the cake" and when the truth is "There are 2 in the cake and 1 in the frosting." In some cases, we're operating with only the list of elements without ever having seen the cake.

Take LGPE for a game example, where the Catch Combo shiny bonus was misunderstood for years. There weren't as many cool debugging tools back then as we have now, so it wasn't as accessible for someone to check like I did. It was a lot easier to see the numbers than to see that it was conditional.

Is it okay if I make content based on your research?

I get this question several times every game release. I fully expect that when I make my information public, it will be shared. A credit would be nice (simply saying where you got the information and/or providing a link back), but I won't be holding your feet to the fire.