Skip to the relevant sections if needed.

Common mergetool from editors will display both LOCAL and REMOTE so you can decide which changes to keep. Please read this tutorial explaining the HEAD objects if you do not know what it is. It will help your understanding of Git tremendously.

We have to change the git config to set a default mergetool. In this example, we will use vimdiff:

We can also set the editor to display the common ancestor BASE while we examine what changes are in LOCAL and REMOTE with the following setting:

Finding out what mergetool editors are supported

Or consult the community of your favorite editor to see how to do the equivalent operations for your editor.

Do not prompt before launching the merge resolution tool

Ref1 for the example
Ref2

Add some galaxy types into astrophy_obj.txt then save the file.

save then commit the file.

Change bar to barred in the file.

Then you will see some error messages:

We can bring up the mergetool:

Then it will bring up the different versions of the file in different Vim splits panels.

The top left split panel is the LOCAL, top middle split is BASE and top right split is REMOTE. The bottom split refers to the MERGED version. You can find this info in the bottom bar of each split (I have put 3 yellow rectangles to highlight that info).

As you can see form the below image, my Vim has highlighted the differences in red for me. 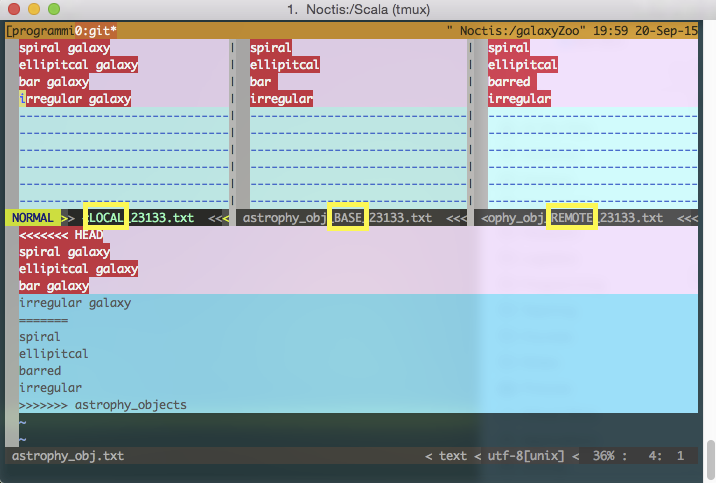 Now if your terminal has any GUI capability and you have compiled Vim correctly with GUI support, you can use your mouse to click on the bottom split to edit it. Or if you are a Vim ninja, you can use the keyboard shortcut to move to different splits.

You can either incorporate the changes by manually editing the MERGED split, or use Vim shortcuts pull from one of the LOCAL, BASE ad REMOTE versions.

save the changes then quit with :wqa to close all the splits. Remember to commit the merge.

Resolving conflict from a git pull

If you were trying to do a git pull when you ran into merge conflicts, follow all steps in the previous section for using the mergetool, then do:

according to the documentation, meaning your local commits will be pushed to the upstream remote branch as a new forward commit that doesn't interfere with previous commits. Hooray now you can claim that you can collaborate with others with Git without messing up with your collaborators' commits.

Other great references and tutorials

Thanks to @ekalosak's comment, I have fixed a mistake confusing the difference branches.